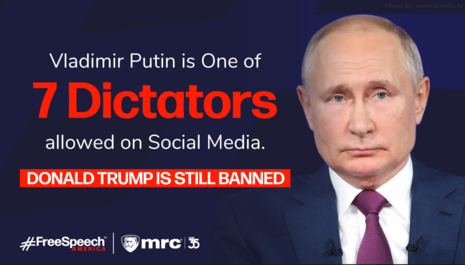 Of these seven dictators, four were also on Facebook, and three were on YouTube as of publication time. Erdoğan and Kagame are on all three social media platforms. The dictators’ accounts have about 38 million Twitter followers, 11.4 million Facebook followers, and 417,800 YouTube subscribers altogether.

All seven of these rulers have been repeatedly identified as dictators. Putin’s military is also in the midst of a devastating invasion of Ukraine, while his verified YouTube and Twitter accounts remain unrestricted.

Ayatollah Khamenei has repeatedly posted violence-encouraging content on social media, including a video depicting the assassination of Trump and former Secretary of State Mike Pompeo. Khamenei, whose government is classified as a state sponsor of terrorism by the U.S. State Department, has also called for the destruction of Israel and the “death” of American leaders in tweets. Iran also killed over 600 Americans in Iraq. Meanwhile, Twitter banned Trump in January 2021 allegedly “due to the risk of further incitement of violence” after Trump had called for peace.

The other dictators have years of corruption and tyranny behind them as well. Cuba’s Bermúdez worked with former Cuban dictators for years. His translated Twitter bio says he is “Committed to the Martían ideas of Fidel and Raúl [Castro].” Fidel Castro was an “evil, murderous,” communist dictator, as Sen. Marco Rubio (R-FL) said.

Rwanda’s Kagame is not only a dictator, he has encouraged and facilitated investments from the genocidal Chinese Communist Party in his country. Kagame has also received positive press from the Chinese state media outlet China Daily.

All of these dictators have corruption in their past, and each practices some form of tyranny in the present. Yet, Trump is still banned from Twitter, Facebook, and YouTube.

As of Feb. 28, after Russia began its invasion of Ukraine, Russia state-affiliated accounts on Twitter, Facebook and YouTube were still allowed to influence their approximately 38.7 million followers. Big Tech has since taken some actions against Russian accounts or state media, but Putin is still on YouTube and Twitter.