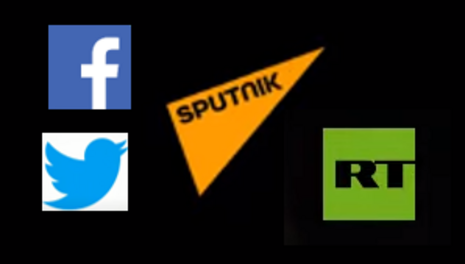 RT and Sputnik are controlled by the Russian government, which has been massing troops along the border with Ukraine. Russia is making warlike overtures to such an extent that both the U.K. and the U.S. have started to withdraw embassy staff and families from Ukraine. Yet RT’s official Twitter account, @RT_com, is still allowed on the social media platform and is also verified. @RT_com’s Twitter bio laughably says, “Freedom over censorship, truth over narrative.”

The Russian state media outlet is also verified on Facebook, @RTnews. Sputnik News also has verified accounts on Twitter and Facebook. Twitter’s policies explicitly ban “violent organizations” and affiliates, and Facebook’s policies ban organizations that “are engaged in violence,” including against “state or military actors.”

As one example of RT’s propaganda, last week it tweeted an article by Australian journalist Graham Hryce. Hryce explicitly accused Trump of a “ham-fisted coup attempt,” referring to the events of Jan. 6, 2021, and insisting Trump “had cynically manipulated [his supporters] for his own purposes.”

Hryce’s basis for his extreme accusation against Trump was unspecified “evidence” from the partisan Jan. 6 committee established in the U.S. House. Trump had actually advised his supporters “to peacefully and patriotically make your voices heard.” Trump later tweeted a plea to “stay peaceful.”

RT posted on Facebook the news that Israel is looking to evacuate Ukraine’s Jews under the threat of a Russian invasion. The RT article denied the current invasion threat and accused “Nazi German forces and local collaborators” of being responsible for all Jewish deaths under Soviet-controlled Ukraine without addressing the Russian history of anti-Semitism.

While the Nazi Gestapo murdered tens of thousands of Jewish Ukrainians during World War II, pre-Soviet Russia has a history of mass killings of Jewish Russians (pogroms) and Soviet dictator Joseph Stalin was anti-Semitic and persecuted Jewish Russians while verbally denouncing such practices.

Twitter and Facebook have consistently allowed extremist groups and government-affiliated accounts to post what appears to be violative content, even as the platforms continue to censor free speech. Chinese state-linked accounts on Facebook had 751 million followers in June 2021. A tweet from Chinese state media site Global Times threatening in October to make Taiwan and Australia “cannon fodder,” for example, remains on Twitter uncensored as of this article’s publication.