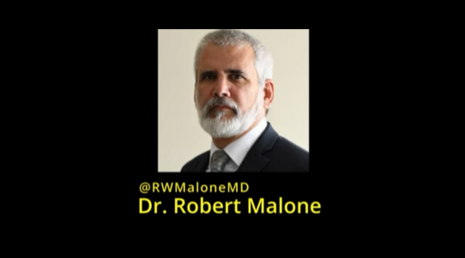 Dr. Malone is an innovator in the field of mRNA vaccine technology used in COVID vaccines. Twitter did not warn Dr. Malone before the suspension, according to The Epoch Times. Malone told The Epoch Times that Twitter previously notified him that users complained about his posts but no action had been taken.

According to Malone and The Epoch Times, Twitter suspended the scientist’s 500,000-follower account for the vague reason: “Violating our policy on spreading misleading and potentially harmful information related to COVID-19. You may not use Twitter’s services to share false or misleading information about COVID-19 which may lead to harm.”

Malone has repeatedly voiced his concerns over the COVID-19 vaccines, based on his own scientific knowledge of the interaction between vaccines and viruses as well as independent studies. He  expressed particular concern about COVID vaccines for children based on studies, including one from Hong Kong that said 1 in every 2,700 boys vaccinated with Pfizer’s Comirnaty would develop myocarditis. Malone further told The Epoch Times that natural immunity is better protection from COVID than vaccines. His last tweet reportedly included a video saying Pfizer vaccines cause more illness than they prevent.

Malone said users could still follow his SubStack. “Over a half million followers gone in a blink of an eye. That means I must have been on the mark, so to speak,” the article quoted Malone. “It also means we lost a critical component in our fight to stop these vaccines being mandated for children and to stop the corruption in our governments, as well as the medical-industrial complex and pharmaceutical industries.”

Malone is not the only one worried about the connection between COVID vaccines and heart issues such as myocarditis. A U.S. Food and Drug Administration letter updating guidance for the approved Comirnaty and emergency use authorized Pfizer-BioNTech vaccines said that Pfizer must “evaluate the association between Pfizer-BioNTech COVID-19 Vaccine and a pre-specified list of adverse events of special interest, including myocarditis and pericarditis, along with deaths and hospitalizations, and severe COVID-19.” The FDA letter thus admitted the vaccines can cause serious adverse events. The letter also said that only the newly approved formula for the Comirnaty and Pfizer-BioNTech vaccines could be given to 5- to 11-year-olds.

Conservatives are under attack. Contact Twitter at (415) 222-9670 and demand that Big Tech be held to account to mirror the First Amendment while providing equal footing for conservatives. If you have been censored, contact us at the Media Research Center contact form, and help us hold Big Tech accountable.