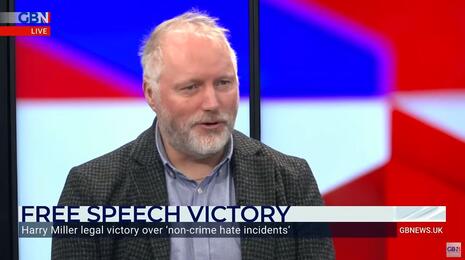 A former police officer won his U.K. Court of Appeal challenge to “hate incidents” guidance from the College of Policing in a big victory for free speech.

Harry Miller had a complaint filed against him after tweeting allegedly “transphobic” comments in January 2020, Reclaim The Net reported. The Humberside Police recorded the complaint as a “non-crime hate incident.”

The College of Policing reportedly defined that as “any non-crime incident which is perceived, by the victim or any other person, to be motivated by a hostility or prejudice.” Miller challenged both the College of Policing’s guidance and Humberside Police’s action on the complaint in February 2020.

The first judge to rule in the case said that Miller’s freedom of speech had received “disproportionate interference” from Humberside Police, but added that the College of Policing’s guidance “serves legitimate purposes and is not disproportionate.” When the case went to the U.K. Court of Appeal, the court ruled that the College of Policing guidance defining Miller’s actions as a “hate incident” had had a “chilling effect” on Miller’s free speech, the story reported.

“There is nothing in the guidance about excluding irrational complaints, including those where there is no evidence of hostility and little, if anything, to address the chilling effect which this may have on the legitimate exercise of freedom of expression,” the article quoted Dame Victoria Sharp. “In my opinion [subsequent updates to the guidance] do not go very far or not nearly far enough to address the chilling effect of perception-based recording more generally.”

Miller reportedly called being offensive “one of the cornerstones of freedom, adding, “Being offensive is not, cannot and should not be an offense.” He continued, “Only when speech turns to malicious communication or targeted harassment against an individual should it be a problem.” Miller slammed the “complete and utter idiots” of the College of Policing and said it needs “shutting down,” the story reported.

The ruling is particularly encouraging as a proposed U.K. bill is under discussion that would increase censorship incentives for companies and include criminal penalties for trolling that could chill freedom of speech. “This is a great day for British democracy and freedom. We have kicked it out of the park,” Miller said.