TIME magazine may need to take some time off after defending a censorship advocate. Leftist activist turned Facebook “whistleblower” Frances Haugen has become internationally famous for allegedly taking on Big Tech, and calling for more censorship and oppressive government regulation along the way. 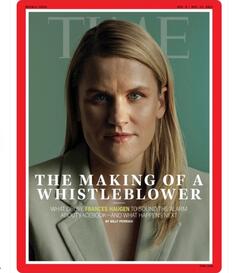 TIME magazine tweeted an image of its new issue cover on Monday, depicting Frances Haugen. The title read, “The Making of A Whistleblower: What Drove Frances Haugen to Sound the Alarm About Facebook–And What Happens Next.” TIME promoted Haugen as a “wunderkind,” and noted how she considered herself an educator rather than an activist, eager to inspire young people to “push back against” harms caused by social media.

The “whistleblower” told TIME she joined Facebook specifically to work on “misinformation,” because she “lost” a friend to “online misinformation” leading up to the 2016 presidential election. Haugen said Facebook should “intervene sooner,” indicating that the platform should stifle alleged “misinformation” before it even reaches an audience. Haugen said “the idea that George Soros runs the world economy” was among the “conspiracy theories” her friend believed at the time. It is interesting to note that George Soros said in 2019 he is trying to “bend” the “arc of history.” 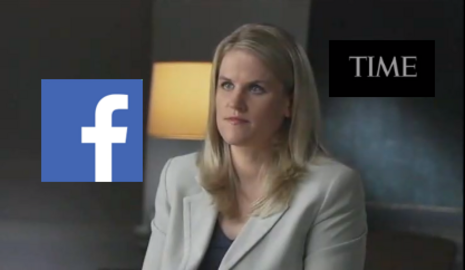 Frances Haugen called for increased online censorship during a Senate hearing and was slammed for it by free speech advocates, including independent journalist Glenn Greenwald and “The Ben Shapiro Show” host Ben Shapiro. Haugen reportedly has advocated for leftist causes in the past, including donating to far-left politician Rep. Alexandria Ocasio-Cortez (D-NY). Haugen reportedly accused her former employer Google of being non-inclusive. Haugen also is represented by lawyers who formerly represented the anonymous Ukrainian “whistleblower” who provided the allegations leading to former President Donald Trump’s impeachment, “but who reportedly turned out to be then-Vice President Joe Biden’s top advisor on the country,” according to The Daily Wire.

Haugen also praised a proposed U.K. bill that could greatly increase the censorship incentive for Big Tech platforms and even chill online speech through a criminalization threat, according to Bloomberg Opinion.