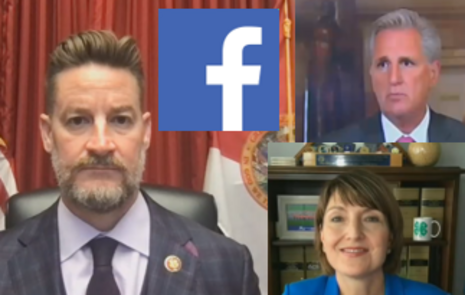 The latest of “The Facebook Files” from The Wall Street Journal described how various Facebook actions reportedly censor conservative news sites and individuals. Breitbart’s traffic would have grown 20 percent, and The Epoch Times would have grown by 11 percent without Facebook tools, per a 2019 study, The Journal wrote. Facebook has also been consistently pressured to censor more by its employees, according to The Journal.

Steube exclusively told MRC Free Speech America, “It is no surprise that Facebook continues to suppress and censure conservatives. The only way to change their behavior is to take away their immunity from lawsuits. That is why I introduced the CASE-IT Act to reform Section 230 and hold Big Tech accountable for partisan censorship to promote your rights under the First Amendment.”

Steube is not the only congressman criticizing Facebook’s censorship. McMorris Rodgers issued a public statement on The Journal’s report. “The Left and their allies in the mainstream media want to use this moment and what we’ve learned from Facebook’s internal documents to push for more censorship of conservatives under the guise of misinformation,” McMorris Rodgers said. “This is wrong and un-American.” She added, “The answer should be more speech, not less.”

Republican House leader McCarthy condemned Facebook too. McCarthy reportedly told Breitbart News that Big Tech only gives users “half the story” and thus suppresses outlets that provide a fuller picture. McCarthy said that Facebook cannot hide behind its algorithms because “humans write the algorithms,” according to Breitbart News. “[E]mployees at these companies are not just hysterically anti-conservative — they are against any idea that doesn’t fit their narrative. That’s why accurate headlines, like ‘Massive Looting, Buildings in Flames, Bonfires!’ from outlets like Breitbart News, feel threatening to them and are then subject to suppression.”