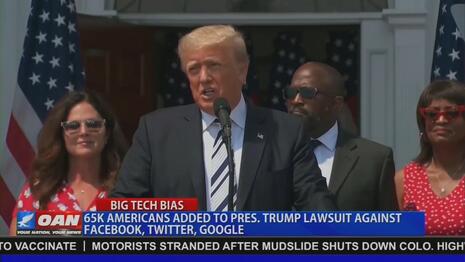 Former President Donald Trump and everyday Americans are now piling on Big Tech for their egregious acts of censorship. Trump has amended his lawsuits against Big Tech corporations and executives to include comments from what appears to be a huge grassroots army of 65,000 Americans.

The nonprofit America First Policy Institute (AFPI) announced that Trump’s amended complaints were filed in late July. Trump said that he launched his lawsuits against Big Tech “in conjunction” with the AFPI in an op-ed that he recently wrote for The Wall Street Journal.

The organization explained that it allowed people to submit examples of how Big Tech has censored them and that 65,000 Americans submitted their stories. “According to the America First Policy Institute (AFPI), Trump’s July 7 lawsuit against Facebook, Twitter, and Google is adding ‘additional censorship experiences’ from some of the nearly 65,000 people who submitted them to the institute,” The Epoch Times reported.

The AFPI said it created a website that allowed people to post their examples of censorship. “[In late July], Amended Complaints were filed in the Big Tech lawsuits against Facebook, Inc., Mark Zuckerberg, Twitter, Inc., Jack Dorsey, Google LLC, and Sundar Pichai. Since the initial filing on July 7, 2021, nearly 65,000 American people have submitted their stories of censorship through America First Policy Institute’s (AFPI) Constitutional Litigation Partnership (CLP) at TakeOnBigTech.com.”

The amended lawsuits appear to have prominent personalities who Big Tech censored attached: “The Amended Complaints include additional censorship experiences and incorporates additional class representatives, including Dr. Naomi Wolf and Wayne Allyn Root.” Wolf is a liberal feminist author and former Bill Clinton adviser. Twitter reportedly banned her in June. Root is a conservative radio personality. Twitter reportedly banned him in February. The AFPI said that it added “individuals on opposite ends of the political spectrum” to highlight bipartisanship on the issue.

White House Press Secretary Jen Psaki’s recent comments that the Biden administration is working with social media platforms to censor so-called misinformation also appear to be additions to the lawsuits. The AFPI said that the lawsuits added “recent statements made by Biden White House officials, confirming the current administration’s collaboration with Big Tech platforms and their efforts to censor the American people.”

Psaki previously said that Surgeon General Vivek Murthy’s office was “flagging problematic posts for Facebook that spread disinformation.” She later attempted to backtrack on her comments but still insinuated that the administration flags “information that’s inaccurate.”

Trump hit Big Tech for colluding with the federal government to censor Americans in his Wall Street Journal op-ed. “In effect, Big Tech has been illegally deputized as the censorship arm of the U.S. government,” he wrote.