Americans turned against Big Tech, according to a shocking Gallup poll. The shift from 2019 to 2021 was drastic with Republicans and independents rejecting “large technology companies.”

More Americans viewed Big Tech negatively by a wide margin. Gallup reported: “A 45% plurality of U.S. adults have a very or somewhat negative view of these firms, defined in the survey as ‘technology companies, such as Amazon, Facebook and Google.’ Another 34% have a very or somewhat positive opinion of them, and 20% are neutral.” Respondents were surveyed in January and February. In comparison, 46 percent of Americans viewed Big Tech favorably in August 2019. Public opinion drastically shifted in the span of only 18 months. 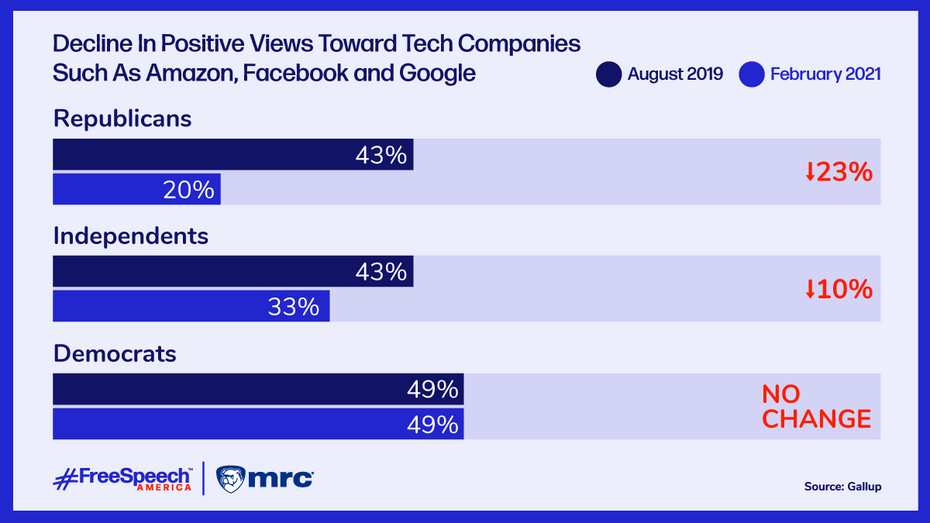 The shift in public opinion should come as no surprise. The conservative movement has worked tirelessly to expose Big Tech’s bias against the American people. MRC President Brent Bozell congratulated the organizations involved for the progress they made: “The hard work by the MRC and Free Speech Alliance to expose the explicit bias and censorship by Big Tech has paid off. The lack of trust of these tech giants is fully warranted. Absolutely no one — conservative or otherwise — should trust a company that seeks to restrict free speech.”

Conservatives began battling Big Tech censorship several years ago. The MRC’s Free Speech Alliance gathered together more than 70 organizations now fighting against online censorship. The organizations in the alliance can accomplish more together than they can fighting separate battles. The fact that public opinion has shifted against Big Tech appeared to show proof that those efforts bore fruit over the past two years.

In 2018, the MRC published the Special Report, CENSORED! How Online Media Companies Are Suppressing Conservative Speech. The report exposed Big Tech’s liberal bias and made waves among elected officials. Members of Congress mentioned the report four times in a House Judiciary Committee hearing in April 2018. Former Rep. Bob Goodlatte (R-VA) submitted the report to the public record at the hearing.

Big Tech censored conservative causes in the 2020 election and the events that followed. Big Tech corporations didn’t help their public perception when they banned former President Donald Trump after he called for “peace” following the January 6 Capitol riot. And the additional efforts of the conservative movement to expose Big Tech’s corruption to the public cannot be understated.

The effort to fight back also grew. In addition to the Free Speech Alliance, the MRC also launched its Free Speech America project in September 2020. Free Speech America has documented more than 2,000 cases of censorship since its inception in a database called CensorTrack. The Free Speech America team also published its first Big Tech Report Card in April. The report card graded Big Tech corporations on issues that included free speech, online freedom and bias. Amazon, Twitter and Apple were given overall “F” ratings.