Facebook censored and de-platformed a Catholic charity that was calling for greater efforts to stop the kidnapping and forced conversion and marriage of Christian women in Islamic countries, according to a new report.

London-based Aid to the Church in Need UK launched a Facebook campaign in November in connection with the release of a new report. The report described the prevalent abuse by Muslim extremists of women from the Christian faith and other religious minority groups in several African and Middle Eastern countries, the Catholic News Agency said. 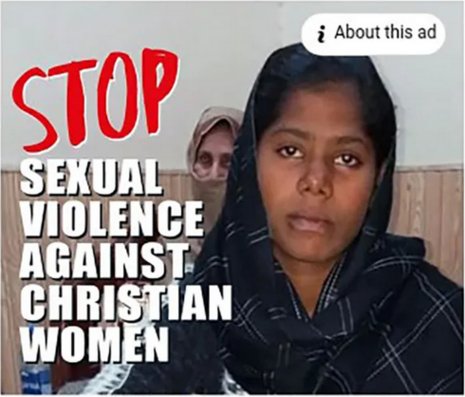 About a week after the campaign started, Facebook notified the group it was cutting the number of ads it could post. But like YouTube’s recent censorship of conservative podcast host Steven Crowder, Facebook didn’t give a justification for its actions.

Facebook provided only a statement that the charity had several ads hidden or reported, and included a veiled swipe: “People hide and report ads because they find them to be offensive, misleading, sexually inappropriate, violent, about a sensitive topic or for other reasons.”

Aid to the Church in Need works to promote the Catholic Church globally, particularly in countries housing Christians who suffer persecution or discrimination. The charity also provides practical assistance and pastoral care for people in need, especially residents of and refugees from those countries.

Facebook told the group that it was reviewing the matter. It offered no timeline “considering the circumstances,” in addition to the necessity for a “detailed investigation and solution,” Catholic News Agency said.

“By curbing this campaign, [Facebook is] silencing these women twice over," the group’s National Director Neville Kyrke-Smith told the news outlet. “They are silenced when they are seized from their homes and forced to live with their abductors, and have now been silenced again by Facebook."

The social media site censored The Babylon Bee after the Christian satire site posted a story making fun of leftist rioters and looters in April. The site had censored the outlet several times before taking that action.

Last December, Facebook continued its censorship that started in 2018 of an image of Santa Claus kneeling beside baby Jesus.

Conservatives are under attack. Contact Facebook at (650) 308-7300 and demand that the company not censor content that raises awareness of the abuse of women. If you have been censored, contact us at the Media Research Center contact form, and help us hold Big Tech accountable.