At least one Republican senator and one Democratic senator are calling on the Federal Trade Commission to investigate TikTok. “There is bipartisan consensus on this threat and no excuse for inaction while Americans remain at risk,” Sen. Marco Rubio (R-FL) said in exclusive comments to MRC Free Speech America. 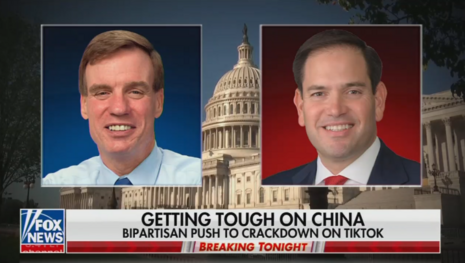 Rubio highlighted the importance of investigating TikTok in exclusive comments to MRC Free Speech America. “TikTok is a known national security risk that robs Americans of their privacy and places users’ sensitive data into the hands of the Chinese Communist Party,” he said. “There is bipartisan consensus on this threat and no excuse for inaction while Americans remain at risk. The Biden Administration must ban TikTok from U.S. telecommunications networks.”

A statement from Warner’s office included the text of the letter to Khan:

“We write in response to public reports that individuals in the People’s Republic of China (PRC) have been accessing data on U.S. users, in contravention of several public representations, including sworn testimony in October 2021. In light of this new report, we ask that your agency immediately initiate [an] ... investigation on the basis of apparent deception by TikTok, and coordinate this work with any national security or counter-intelligence investigation that may be initiated by the U.S. Department of Justice.”

The senators also expressed concerns about ByteDance, TikTok's parent company, which is partially owned by the Chinese Communist Party (CCP):

“TikTok’s Trust and Safety department was aware of these improper access practices and governance irregularities, which – according to internal recordings of TikTok deliberations – offered PRC-based employees unfettered access to user information, including birthdates, phone numbers, and device identification information. Recent updates to TikTok’s privacy policy, which indicate that TikTok may be collecting biometric data such as faceprints and voiceprints (i.e. individually-identifiable image and audio data, respectively), heighten the concern that data of U.S. users may be vulnerable to extrajudicial access by security services controlled by the CCP.”

NewsBusters reported that Chew backtracked after claiming that China-based employees can access data from U.S. users.

"Employees outside the US, including China-based employees, can have access to TikTok US user data subject to a series of robust cybersecurity controls and authorization approval protocols overseen by our US-based security team," Chew reportedly said in a letter to U.S. senators obtained by The New York Times.

Chew allegedly claimed that the accessed data required “approval” based on data classification.