Justice Thomas Will Be Key Player In Fight Against Censorship 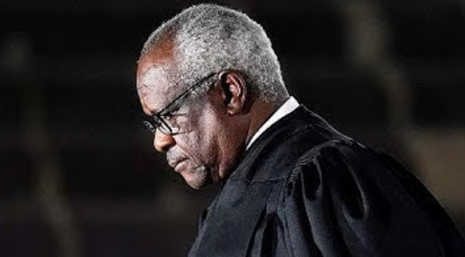 All eyes will be on Supreme Court Justice Clarence Thomas now that the Texas “censorship” law will go into effect.

Protocol on Thursday reported that a legal challenge to the new law that reached the high court would be a gift to Thomas. In the past, Thomas argued social media platforms like Facebook and Twitter were “sufficiently akin” to “common carriers,” and as such, users should not be denied access to the platforms based on their viewpoints.

Protocol also reported that last year Thomas wrote that the Supreme Court had “no choice” but to “address how our legal doctrines apply to highly concentrated, privately owned information infrastructure such as digital platforms."

After the Fifth Circuit upheld the controversial law earlier this week, experts stated that this could be Thomas’ opportunity to go after Section 230 of the Communications Decency Act of 1996, which some conservatives argue allows social media platforms to censor right-of-center content without consequences.

"He took the opportunity to rip on Sec. 230 in [a] case that didn’t even present the issue in any way at all," David Greene, a senior staff attorney at the Electronic Frontier Foundation, told Protocol. "So one that presents the issue, I think he’ll certainly jump on that.”

Others said social media companies wanted the issue to be taken up in the court’s “shadow docket,” which considers cases without oral argument.

“I just don’t see how social media companies can risk having this law stay on the books,” University of Texas law professor Steve Vladeck, told Protocol. “There will be a ton of pressure to ask the Supreme Court to vacate the stay.” Vladeck has argued over a dozen cases before the Supreme Court.

He added that the Supreme Court was more active when it intervened in cases that impacted society at large.

“The reality here is that the Fifth Circuit stay is going to create such an immediate impact that it’s going to be hard for the court to think that it's appropriate to wait,” Vladeck noted to Protocol.

Meanwhile, plaintiffs NetChoice and the Computer and Communications Industry Association (CCIA) panicked over the loss. NetChoice sued Texas and Florida over anti-censorship laws last year and argued that the laws violated the First Amendment.

“Allowing HB 20 to take effect will inflict significant harm on Texans by threatening the safety of users, creators, and businesses that use these websites to reach audiences in a family-friendly way,” NetChoice President and CEO Steve DelBianco said in a statement at the time. “No American should ever be forced to navigate through harmful and offensive images, videos and posts.”

In a statement to Protocol, CCIA president Matt Schruers said “[n]o option is off the table” to stop the law.