"We removed content from and issued a strike to The Heritage Foundation channel for violating our election integrity policy, which prohibits content that advances false claims that widespread fraud changed the outcome of the 2020 U.S. presidential election, such as claims that the election was rigged. As a result, this channel is temporarily suspended from publishing new videos or livestreams. Our policies apply to everyone and we enforce it consistently, regardless of the speaker."

The president of the Heritage Foundation had a stern message for Big Tech. 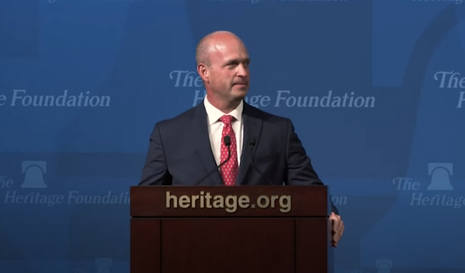 Kevin Roberts, the president of the Heritage Foundation, alleged that YouTube removed a video of former President Donald Trump’s speech at a Heritage event last month.

“America is facing dark times and tremendous plight due to the radical shift away from America First,” Trump said in his speech. “However, America’s greatness is not lost if we act with purpose. We can and must turn this around to Save America.”

Roberts slammed the reported removal and called Big Tech “an enemy of the people.”

“Unbelievable: @YouTube just informed @Heritage that it has taken down the video of former President Trump’s speech at our event in Florida last month,” Roberts tweeted with a screenshot of what appeared to be a warning from YouTube that the video violated the platform’s Terms of Service.The platform did not appear to state which terms the video violates.

“Big Tech is an enemy of the people, and needs to be held accountable with policies that hit them where it hurts,” Roberts added.

Unbelievable: @YouTube just informed @Heritage that it has taken down the video of former President Trump’s speech at our event in Florida last month.

Big Tech is an enemy of the people, and needs to be held accountable with policies that hit them where it hurts. 🧵👇 pic.twitter.com/gum0yC3ms7

Roberts said the video had over half a million views at the time it was allegedly removed and stated that Tesla CEO Elon Musk should buy YouTube as well.

“We posted the 82-minute video on April 21 and it had more than 530,000 views,” he said. “But YouTube’s censorship council, in all its wisdom, decided that several seconds of Trump’s remarks warranted banning us from the platform for a week. Maybe @elonmusk should buy them, too.”

He encouraged users to view the complete video on Rumble, a video streaming alternative to YouTube.

“To watch Trump’s speech for yourself, go check out the video on @rumblevideo, where they actually embrace free speech,” he tweeted.

NewsBusters reported earlier this year that YouTube removed a video of a Trump speech earlier in the year for so-called election “misinformation.”

The video received over 5 million views in 24 hours. Trump compared the deletion to the Russian state media’s censorship of news about the country’s invasion of Ukraine.

"This is what they do in Russia, you know, if you look at Russia ... the people in Russia don't even know they're fighting a war with Ukraine," Trump said of the reported removal.