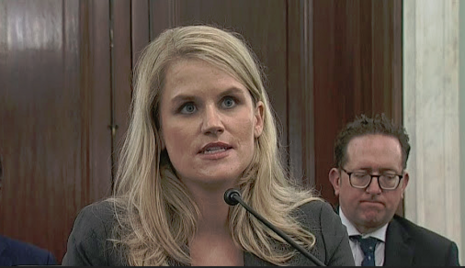 Facebook “whistleblower” Frances Haugen said she was “cautiously optimistic” about Elon Musk’s purchase of Twitter. Haugen alleged last year that Facebook prioritized its own profits over public safety and encouraged content moderation in her testimony to Congress.

Fox News reported that she said that Mark Zuckerberg has too many people around him who “tell him what he wants to hear.” She said that Musk handled feedback better.

"I have a feeling that Facebook is going to rationalize to itself that it can't really do anything different than it already does because of the demands of the market," Haugen said, according to Fox. "I think there's a huge opportunity here for Elon to really demonstrate that there's another way forward."

She hoped that Musk would “increase transparency” on Twitter.

"One of the key parts about a system as critical as Twitter for our democratic processes is whether or not people trust that the system is fair. And right now, I would say that trust in Twitter is a little bit in flux," Haugen said, according to Fox. "The number one most important thing [Elon] can do is institute real transparency. Transparency is how he's going to go to prove that he's acting in ways that are aligned with the public good and it’s how he's going to build trust in his ability to run the system."

She praised Musk’s commitment to shutting down spam bot accounts.

"That kind of action is potentially dangerous when you have a publicly traded company because the number of users you have will go down," she noted, according to Fox. "That's a good sign Elon is going to be wanting to do those kinds of structural changes that Twitter may have not been as brave to do when they had to have their hands tied by making sure the number of users they had went up every single quarter."

Haugen maintained her stance about the issues at Facebook.

"I've maintained since my first testimony that I think a lot of the problems that we're facing on social media are a result of a business model," she said, according to Fox. She also called on Meta to release its safety plan to the public.

"When [Mark Zuckerberg] announced the metaverse, they spent five minutes making empty platitudes about safety by design," she told Fox. "We should be like, ‘Hey, publish your safety by design plan.’ Don't tell us, show us, because I think they're going to reproduce all the challenges they face on Facebook only with a platform that's more immersive and more decentralized."