Another Aging Lefty Rocker Is Attacking Joe Rogan and Spotify 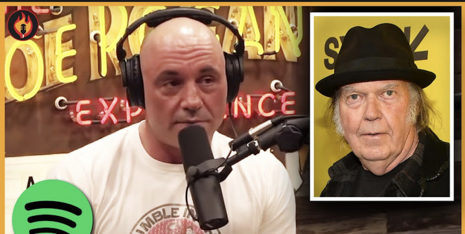 Spotify has faced more criticism for its decision to keep Joe Rogan’s podcast on the platform. Last week, artist Neil Young challenged the music streaming platform to remove the podcast or remove his music. Spotify removed his music.

And now, singer Joni Mitchell also asked that her music be removed from the platform.

“Irresponsible people are spreading lies that are costing people their lives,” Mitchell said of her decision. “I stand in solidarity with Neil Young and the global scientific and medical communities on this issue.”

Via their foundation, Prince Harry and Meghan Markle also expressed “concerns” about the platform’s ability to combat misinformation online.

"Last April, our co-founders began expressing concerns to our partners at Spotify about the all too real consequences of COVID-19 misinformation on its platform," an Archewell spokesperson said according to CNN. "We have continued to express our concerns to Spotify to ensure changes to its platform are made to help address this public health crisis."

"We look to Spotify to meet this moment and are committed to continuing our work together as it does," the spokesperson added.

The pair had a deal to host podcasts on Spotify but continued to critique its decisions.

"Since the inception of Archewell, we have worked to address the real-time global misinformation crisis," a spokesperson said. "Hundreds of millions of people are affected by the serious harms of rampant mis- and disinformation every day."

For its part, Spotify CEO Daniel Ek said the company will now add a content advisory on podcasts that mentions COVID-19. The user will then be directed to information about the virus from physicians and other health officials.

“We know we have a critical role to play in supporting creator expression while balancing it with the safety of our users,” he said. “In that role, it is important to me that we don’t take on the position of being content censor while also making sure that there are rules in place and consequences for those who violate them.”