WALKING ON EGGSHELLS? Joe Rogan Explains What Could Cause Him to Leave Spotify Platform

Rogan, host of The Joe Rogan Experience podcast, outlined the circumstances that would cause him to consider leaving Spotify.

“If I become something different because it grew bigger, I’ll quit. If it gets to a point where I can’t do it anymore, where I have to do it in some sort of weird way where I walk on eggshells and mind my p's and q's, fuck that!” Rogan said in an interview released March 29. Rogan added his show “requires sincerity. Without it, this show doesn't have any success.”

Rogan, who regularly faces backlash from media for questioning liberal narratives, smashed narratives pushed by establishment media. “Look at this: ‘inflation stings most if you earn less than three hundred thousand.’ That’s a lot of fucking money,” Rogan said as he read a Bloomberg News headline. “Talk about being delusional and out of touch. ‘Inflation stings’ if you earn less than a third of a million dollars a year?” 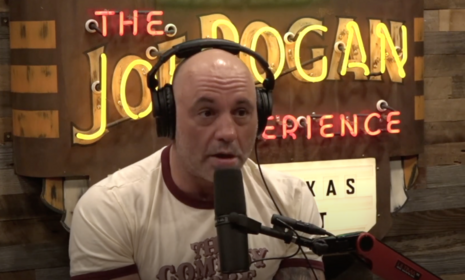 The Daily Mail reportedly interviewed music law attorney Cassandra Spangler who suggested Rogan could be liable for breach of contract if he split with Spotify: “It seems that there could be a large amount of money involved here in the event of a breach of the agreement by either (or both) parties, which could make a lawsuit worthwhile.”

She also reportedly noted that “It would also be interesting to know whether there is anything in the contract that gives him full creative control over his podcast or whether there are terms that allow Spotify to censor or remove content based on certain standards.”

After facing scrutiny in early 2022 for hosting guests that provided alternative narratives about COVID-19, Rogan released a video on Instagram that many described as a “non-apology” to the people offended by the so-called “misinformation” spoken during his podcast interviews.

“The problem I have with the term ‘misinformation,’ especially today, is that many of the things that we thought of as misinformation just a short while ago are now accepted as fact,” he said in the video.

Rogan noted a few major COVID-19 claims that were censored for being so-called “conspiracy theories,” but now are the predominant explanations for drivers of the pandemic:

Conservatives are under attack. Contact your representatives and senators and demand that Big Tech be held to account to mirror the First Amendment while providing transparency, clarity on “hate speech” and equal footing for conservatives. If you have been censored, contact us using CensorTrack’s contact form, and help us hold Big Tech accountable.