Former Democratic Rep.Tulsi Gabbard of Hawaii skewered Big Tech for having “CENSORED” an interview of hers where she criticized Western interference in Ukraine.

“YouTube/Google are offended by my criticism of the Military Industrial Complex and my advocacy for negotiated settlement in Ukraine, because they are the social media arm of that warmongering Power Elite/MIC,” Gabbard explained in a March 16 tweet. Her tweet features a video of an internet user having to go through several complicated steps to see an Ingraham Angle interview with Gabbard.

In the early March interview, Fox News host Laura Ingraham asked Gabbard: “Why are we talking about no-fly zones instead of the fact that for the first time, we have President Zelensky stepping back from his earlier NATO wishes and even demands?”

Gabbard said few people are discussing a statement by Zelensky on ABC News indicating he may be open to setting NATO membership aside and negotiate directly with Russian President Vladimir Putin. 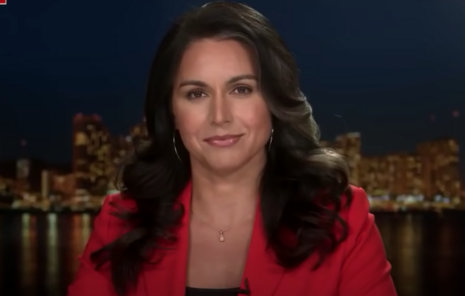 YouTube smeared the Fox News video with two censorship filters: one suggesting that “This video may be inappropriate for some users,” requiring viewers to click or even sign in to verify their age, according to Gabbard’s video. Another filter claimed “the following content has been identified by the YouTube community as inappropriate or offensive to some audiences.”

Gabbard has a history of slamming Google for meddling in American politics. Gabbard’s campaign account criticized Google on Twitter for suspending her “search ad account w/o explanation” after the first Democratic presidential debate.

YouTube more recently has gained infamy for censoring users who question legacy media and pro-war consensus. The platform censored the “Ukraine on Fire” (2016) documentary showing the purported history of U.S. involvement in Ukraine.