Heroes of Liberty editor Bethany S. Mandel said that Facebook banned the line of children's books she edits, which capture the lives of historical American leaders.

Mandel stated that Facebook designated Heroes of Liberty books about the fascinating lives of American presidents and Supreme Court Justices to be "Low Quality or Disruptive” content. “My new children's book publishing company, @HeroesOfLiberty, was dealt a real blow going into the New Year, when we were banned by Facebook,” Heroes of Liberty editor Bethany S. Mandel tweeted Jan. 3. “Our books are designed to inspire children. We invested much of our seed capital in building our brand on Facebook. But Facebook has now shut down our advertising account.”

Mandel framed the story in dire terms to Fox Business: “The question is: is a children's biography of Ronald Reagan no longer permissible on Facebook? We don’t know. But apparently promoting one may well kill a business.” 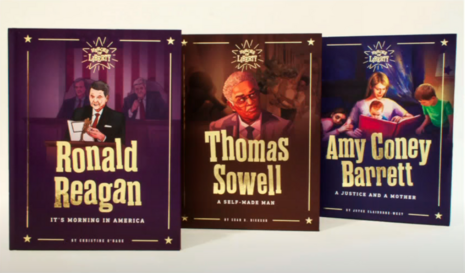 Mandel said in another tweet that while a bunch of liberal social media users may have mass reported her books for celebrating figures like President Ronald Reagan, it was ultimately Facebook’s choice to bow to their cancel culture nonsense:

“We had a number of negative comments on the posts and we think they reported our content. They were triggered by a children's book that portrays Ronald Reagan as a hero. But this was not their decision. It was Facebook’s decision, they went along with them it seems.”

Fox Business reported that Mandel “hesitated” to frame what happened to her as anti-conservative censorship, instead calling it “anti-American”:

"We are not in politics, we are in the business of creating beautiful stories about great people that will entertain children and give them life lessons," she said. "To cancel children's books because they celebrate American values that 90% of Americans believe in isn’t even anti-conservative bias, it's anti-American. Pure madness."

While there are numerous examples of when a Big Tech platform acknowledged a so-called “mistake” or “error” in its moderation, Fox Business noted that Facebook has reportedly responded to an appeal from Heroes of Liberty:

“After Heroes of Liberty appealed, Facebook sent another message. ‘After a final review of this ad account, we confirmed it didn't comply with our Advertising Policies or other standards,’ the message reads. ‘You can no longer advertise with this ad account and its ads and assets will remain disabled. This is our final decision.’"

Conservatives are under attack. Contact Facebook headquarters at (650)308-7300 and demand that Big Tech mirror the First Amendment while providing transparency and equal footing for conservatives. If you have been censored, contact us at the Media Research Center contact form, and help us hold Big Tech accountable.