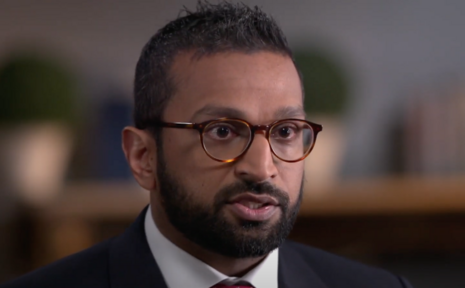 Patel appeared on the Fox News Channel's Outnumbered to explain the current chaos unraveling in Afghanistan. He roasted Twitter for “allowing the Taliban to propagate its propaganda across the world.” He added that the terror organization “is taking the situation and placing it at their advantage.”

Twitter has unacceptably censored former President Donald Trump in the past to the point of actually kicking him off the platform, while allowing Islamic terrorist leader Ayatollah Ali Khamenei to remain. In a 2020 tweet, Khamenei wrote, "The only remedy until the removal of the Zionist regime is firm, armed resistance."

The next day he followed up by infamously calling Israel a “deadly, cancerous growth” that “will undoubtedly be uprooted and destroyed.” A Twitter spokesperson even defended Hamas’ presence on Twitter, despite Twitter’s rule against supporting and perpetuating violence.

Patel also scorched the Taliban for “laying fault at America for blowing up bombs in Afghanistan where citizens are, which is just untrue, but that is how the Taliban establishes credibility in countries. It’s how it gains further support because they have a propaganda machine, and they don't have the ethics that we do.”

Patel’s comments were in response to a question from Fox News host Emily Compagno, who had asked Patel for his take on the Taliban regime’s denying it was involved in the attack. The alleged Taliban spokesman account on Twitter claimed that it “strongly condemns the bombing of civilians” that took place earlier today.

“The Islamic Emirate strongly condemns the bombing of civilians at Kabul airport, which took place in an area where US forces are responsible for security. The Islamic Emirate is paying close attention to the security and protection of its people, and evil circles will be strictly stopped.”

ISIS has since taken responsibility for the “martyrdom attack,” according to NBC News.

Patel slammed social media again for empowering a radical Islamic regime by allowing it to communicate via social media:

“And they are continuing to do so on these big tech platforms and it's continuing to assist in terrorist activities in the deaths of Americans and our allies and I wish that they would stop it and call them out for their terrible actions here.”

Patel played a critical role in the Donald Trump administration in that he “oversaw the execution of several of President Donald J. Trump’s top priorities, including eliminating ISIS and Al-Qa’ida leadership.”

The Washington Post ridiculously defended the terrorist organization and suggested that it could avoid deplatforming so long as it plays by the rules Big Tech has outlined: “[T]he ability of the Taliban and its supporters to operate substantially within the rules of companies such as Facebook, Twitter and YouTube has left Silicon Valley vulnerable to intensifying political crosscurrents: U.S. conservatives have been demanding to know why former president Donald Trump has been banned from Twitter while various Taliban figures have not.”

The Post absurdly indicated that, according to analysts, “Trump’s posts for years challenged platform rules against hate speech and inciting violence. Today’s Taliban, by and large, does not.”

Conservatives are under attack. Contact your local representative and demand that Big Tech mirror the First Amendment while providing transparency and equal footing for conservatives. If you have been censored, contact us using CensorTrack’s contact form, and help us hold Big Tech accountable.