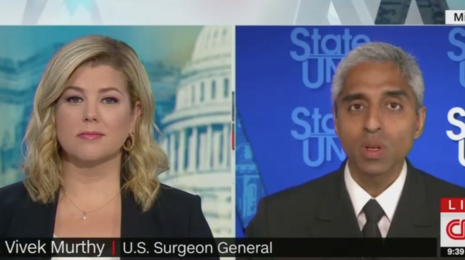 According to Murthy in an August 22 appearance of CNN’s State of the Union, the American people are so-called “superspreaders” of misinformation by questioning the government narrative, according to the Biden administration. America’s current surgeon general responded to Facebook’s most recent transparency report by scourging social media

Murthy went on to say “its happening largely and in part, aided and abetted by social media platforms.” His diagnosis was that Big Tech may have done “some things to reduce the spread of misinformation,” but it’s “not nearly enough.”

Fill-in host Brianna Keilar mentioned that Facebook's quarterly transparency report for Q1 of 2021 indicated that an article critical of COVID-19 vaccines was among the most popular links. The New York Times claimed to have obtained a scanned copy of the report. Murthy slammed social media for doing too little to censor information the Biden administration disapproves of: “There are people who are superspreaders of misinformation.” He then warned that “there are algorithms, still, which continue to serve up more and more misinformation to people who encounter it the first time. These are things that companies can and must change. And I think they have a moral responsibility to do so quickly and transparently.”

MarketWatch suggested the transparency report was an indictment of moderation policy at Facebook: “Its most-viewed link between January and March was a news story about a CDC investigation into the death of a doctor who had received the COVID-19 vaccine two weeks earlier.”

MarketWatch further noted that “[w]hile the news story about the doctor was legitimate, some questioned why an article that cast doubt on the safety of the vaccine and was promoted heavily by anti-vaccine groups was distributed so widely by Facebook’s algorithm.”

In contrast to Murthy’s claims, Facebook has been notoriously sloppy and all too  quick to censor conservatives and narratives with which it disagrees. Facebook fact-checker PolitiFact came after the Media Research Center (MRC) for citing a graphic first released by the Centers for Disease Control and Prevention.

Conservatives are under attack. Contact Facebook headquarters at 1-650-308-7300 and demand that Big Tech mirror the First Amendment. If you have been censored, contact us at the Media Research Center contact form, and help us hold Big Tech accountable.