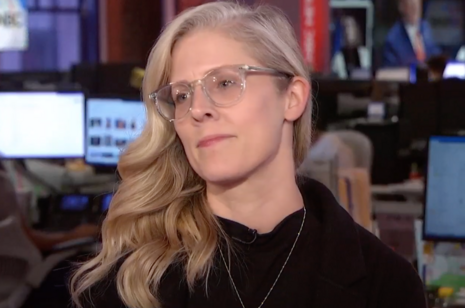 NBC investigative reporter Brandy Zadrozny is one of the internet's most famous Cancel Vulture journalists ruining the lives of everyday Americans. She blasted Fox News and right-wing commentators in an interview with the Nieman Journalism Lab.

On Thursday, Zadrozny was introduced by Nieman Lab writer Brad Esposito in an interview as a “librarian turned reporter,” and she indeed has no qualms about nagging Americans to hush. While Zadrozny claimed that “[t]here’s so few monsters in the world,” she said she has “never felt so secure in my critique of a place” as calling Fox News “trash.” She mentioned “Fox” seven times during the interview.

One segment that oddly enraged her was when former Fox News host Eric Bolling used “doughnuts” to explain the crisis of America’s national deficit under then-President Barack Obama. “That was actually an Eric Bolling segment that actually aired and I remember just screaming at the TV — like, we had all of these TVs, and I was like, nooooooooooo. So a lot of screaming.”

Despite a history of reporting on extremism on social media platforms, Zadrozny only mentioned Antifa in the context of paranoia by certain “Facebook groups.” She also merely described Black Lives Matter protestors as people “saying the names of Black men and women who were killed for no reason.” Meanwhile, she described white counter demonstrators, who likely came to prevent the destruction of the local area, as an “army of white people [in fatigues] with huge guns everywhere.”

Esposito brought up the January 6 Capitol riot. Neither Esposito nor Zadrozny mentioned the Black Lives Matter riots that destroyed property in multiple cities including $500 million in damages in Minneapolis alone, according to Fox News. The two journalists also failed to mention the more recent Capitol attack where an aspiring Nation of Islam member reportedly attacked multiple police officers, resulting in the death of one officer and himself.

Zadrozny’s methods have been criticized by conservative media.

Revolver News summarized Zadrozny as “The Woman In Charge of Doxxing and Destroying Trump Supporters” in its October headline. That article included a scathing summary of her career, alleging that she “appears to use paid, dark-data search engines to dox the personal information of anonymous Trump supporters online — obtaining property records, phone information, and even their Amazon wish lists.”

Zadrozny’s own words within the Verification Handbook, a guide for tattletale journalism, damningly revealed her passion for ruining the lives of private citizens for disagreeing with her politically. “My favorite kind of stories are those that reveal the real people behind influential, anonymous social media accounts,” she explained. They “communicate the ideas and opinions that for personal or political reasons, they dare not say out loud.”

Conservatives are under attack. Contact your local representative and demand that Big Tech allow equal footing for conservatives. If you have been censored, contact us at the Media Research Center contact form.