Only some experts are allowed to comment, apparently. That much was made clear when YouTube censored White House presidential advisor and Dr. Scott Atlas, M.D, for going against the World Health Organization’s narrative. 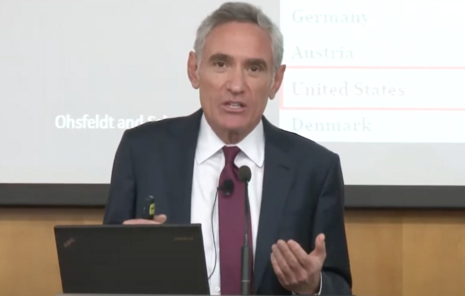 “YouTube has yanked down a video produced by Stanford University's Hoover Institute featuring public health expert Dr. Scott Atlas, M.D., because it ‘contradicts the World Health Organization [WHO] or local health authorities' medical information about COVID-19,’” The Blaze reported in a September 14 article. While Atlas is far from the first casualty of Big Tech liberals’ scorched earth campaign to squelch contradicting opinions about the COVID-19 pandemic, the fact they are coming after a respected doctor is definitely an acceleration.

The video reportedly “did not treat the virus as a hoax, engage in conspiracy theories, or otherwise diminish the seriousness of the pandemic.” It did, however, call out leaders for underestimating the human cost of the massive lockdown:

The Blaze summarized Big Tech’s draconian measures against the video:

Now, when users attempt to load the video — which was first uploaded in June — an error message appears stating that the video has been removed “for violating YouTube's terms of service.” A further explanation provided by YouTube states that the specific reason this video violates those terms of service is that it ‘contradicts the World Health Organization or local health authorities' medical information about COVID-19.

Liberal leaders have not been shy about trashing Dr. Atlas’ reputation.

Like Microsoft founder and mega donor Bill Gates who claimed that Dr. Atlas was merely appointed as the White House coronavirus advisor because he agrees with the Trump administration's "crackpot theories."

This is not the first time Big Tech has silenced doctors’ dissenting opinions’ either.

Facebook famously censored speculation over hydroxychloroquine being used as a cure for COVID-19 in late July, even when other nations were reportedly using it as a treatment. Business Insider summarized that, in the censored video, “doctors from a group called America's Frontline Doctors insist that hydroxychloroquine is a ‘cure’ for coronavirus, and called studies questioning the effectiveness of the drug ‘fake science.’”

Facebook, like other Big Tech companies, has set up organizations like the World Health Organization to be the gold standard of truth about the COVID-19 virus and its prevention. This choice has proven to be extremely problematic since the pandemic began. As late as January 14, WHO claimed in a tweet:

Conservative leaders such as Congressman Jim Jordan (R-OH) raked Big Tech over the coals for supporting the WHO at a late-July hearing as “the organization that lied to us, the organization that shilled for China,” he qualified. Jordan juxtaposed how the WHO “can say whatever they want. They can lie for China, they can shill for China,” but “if you say something against them, you get censored.”