The liberal media likes to hype that a lack of social media censorship and free speech online are ruining our democracy. But podcast host Joe Rogan has a different take.

The host of the Joe Rogan Experience Joe Rogan told Democratic Party presidential primary candidate Congresswoman Tulsi Gabbard (D-HI) on the Nov. 26 episode that Big Tech companies are “interfering with democracy.” And Gabbard, who is suing Google for $50 million and accused the platform of suspending her campaign’s advertising account at a critical period after a Democratic presidential primary debate, ostensibly agreed.

“This is bigger than just the loss in opportunity that my campaign had because this happened on that night during that peak period,” Rep. Gabbard claimed. “Its a bigger issue about the power that this corporation has in Google in interfering essentially in fair elections and in what kind of information they’re willing to put in front of people.”

By contrast, Sen. Mazie Hirono, also from Hawaii, and the top Democrat on Cruz’s Judiciary subcommittee, reportedly blasted Republicans for accusing Big Tech of censorship and rigging the system, saying that they were "browbeating the tech industry for a problem that does not exist” at a July hearing. 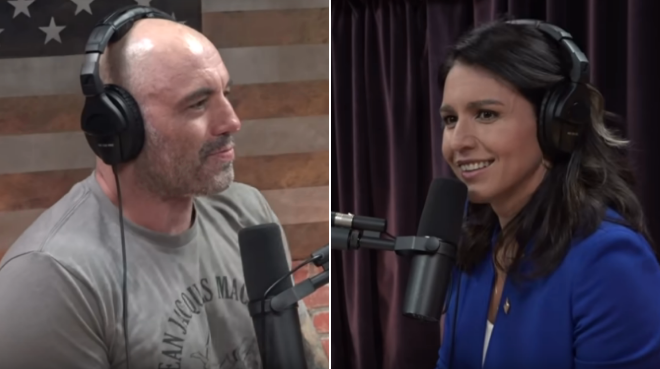 Rogan condemned the massive power of Big Tech companies like Google, suggesting that they are “interfering with democracy in this weird, sort of, semi-legal way.”

Rogan later cited how Canadian feminist Meghan Murphy was banned from Twitter for life due to her posts arguing that men and women are not interchangeable. “You can’t even have opinions on things that are controversial without being removed from the discourse,” said Rogan. He added that this is especially dire because “you don’t have the First Amendment protecting people from a legitimate opinion that’s actually based on, you know -- whether you like it or not -- biological science.”

Gabbard seemed to agree with Rogan on this point as well, and condemned this sort of politically correct authoritarianism and Cancel Culture phenomenon that “threatens the kind of freedom of speech and discourse that I think we’ve celebrated in this country for so long.”

She suggested that America has been “the country where you can stand up and say what you believe no matter how terrible I may think it is, or how strongly I may disagree with it.”

Gabbard also mentioned how Sen. Kamala Harris (D-CA) called for President Donald Trump to be deplatformed from Twitter. “I was asked about it by a reporter shortly after she had made this announcement,” Gabbard recounted, before adding that she responded, “I disagree with -- not everything -- but a lot of what Trump says, but freedom of speech, freedom of speech. So, no. I completely disagree with her.”

Continuing to discuss the Big Tech censorship conundrum, Rogan asked Gabbard for what she believes is a potential solution.

Along with breaking up what she considered to be Big Tech monopolies, Gabbard suggested that Congress needs to begin “digging down” and “passing laws that provide actual oversight and a level of accountability to ensure that our freedom of speech and our freedom to access information is not impeded by these tech giants, whether it’s for their own profits or to pursue their own political interests.”