An Israeli legal scholar complained that YouTube twice censored his interview about Israel’s strikes against the terror group Hamas. Then YouTube gave conflicting accounts about why it censored him. 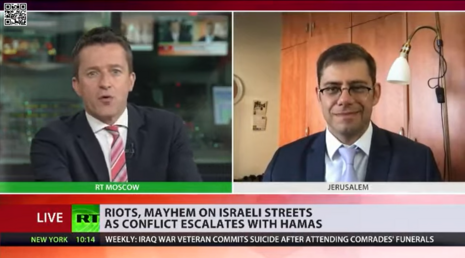 Antonin Scalia Law School Professor Eugene Kontorovich told the Media Research Center (MRC) that YouTube removed video of an interview he did on RT, a Russian propaganda outlet. He said the takedown notice YouTube emailed him stated that a "team" of reviewers "think" the video violated the platform's guidelines.

Yet, YouTube said in a public statement that its mishandling of the video was the result of “relying more on technology to help with some of the work normally done by reviewers.”

“‘Team’ and ‘think’ suggests human,” Kontorovich said in a phone interview with the MRC. “So, they’re telling me, you know, that people took it down, and then subsequently they were justifying it by saying, ‘An algorithm took it down.’ So, those can’t be both true.”

Santi Ruiz, staff reporter for The Washington Free Beacon, broke the story, detailing YouTube's removal of Kontorovich's interview. Ruiz detailed the discussion on why international law justified Israel's military response in Gaza. Ruiz told the MRC that YouTube reinstated the video shortly after the story was published. The platform said it had reviewed the video manually and found no issues with it, according to discussions the MRC had with Ruiz.

Kontorovich posted the clip a second time, to his own YouTube channel, and the platform once again removed it. YouTube indicated the removal was a result of violating its "violent criminal organizations" policy, according to The Free Beacon. That video was then reposted by Kontorovich. YouTube blamed its mishandling of the video on the platform’s overreliance on "automated systems" during the coronavirus pandemic.

A YouTube spokesperson told the MRC that the platform has been “temporarily relying more on technology to help with some of the work normally done by reviewers” as part of its response to the coronavirus pandemic. As a result, its “automated systems removed content that did not violate [its] policies.” The spokesperson added that the platform “worked to quickly reinstate” Kontorovich’s video after it was incorrectly flagged and taken down.

YouTube said it would revert back to using more human moderators to police speech across its platform in September 2020, after admitting to removing “the most videos we've ever removed in a single quarter.” YouTube began relying on automated systems because they allowed employees to remain home during the pandemic’s lockdown measures.

Conservatives are under attack. Contact YouTube at 650-253-0000 and demand that the platform mirror the First Amendment. If you have been censored, contact us at the Media Research Center using our contact form, and help us hold Big Tech accountable.