Twitter is now even restricting statements made by former President Donald Trump from being posted on its platform. 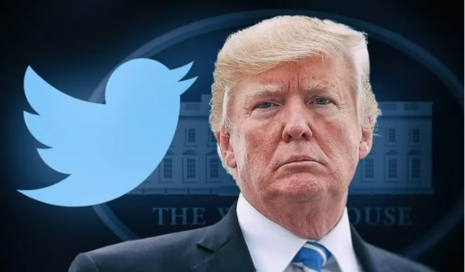 The social media giant has reportedly suspended accounts that have been sharing statements from Trump, which he has been releasing from his new website, From the Desk Of Donald J. Trump. A Twitter spokesperson reportedly told NBC News: “As stated in our ban evasion policy, we’ll take enforcement action on accounts whose apparent intent is to replace or promote content affiliated with a suspended account.”

Four of the suspended accounts appeared to have been set up for the sole purpose of sharing the former president’s statements on Twitter. Despite the uncertainty of who was behind the keyboard running the four accounts, @DJTDesk, @DJTrumpDesk, @DeskofDJT and @DeskOfTrump1, were all suspended.

A source close to “Team Trump” reportedly told the New York Post that @DJTDesk “was not created by anyone on President Trump’s team.”

One Twitter user shared a purported screenshot of the @DJTDesk account responding to accusations that Trump was evading the platform’s ban before the account was removed from Twitter. "Former President Donald J. Trump is not Tweeting," the purported @DJTDesk account wrote. "Any post made, aside from replies like this one, are direct copies from the forum that's composed at DonaldJTrump.com/Desk. Posts are made by Save America on behalf of the 45th POTUS, then distributed onto this platform."

Trump’s new website, which was launched Tuesday, acts as a megaphone for the former president. Trump has been releasing his thoughts in short press release form or Twitter-like posts on the site which can then be shared by anyone to social media.

David Martosko, the DailyMailTV White House correspondent,, theorized in a tweet that the Trump team was attempting to “provoke a lawsuit so it can argue in court that Twitter is a public utility & must be open to everyone.”

Just yesterday, the Facebook Oversight Board upheld Trump’s suspension from the Facebook and Instagram platforms for up to another six months. That gives  Facebook time to determine a more appropriate penalty than the “indeterminate and standardless penalty of indefinite suspension.” Trump did not take this decision lying down. He blasted Big Tech as a “total disgrace” in a statement released from his new website.