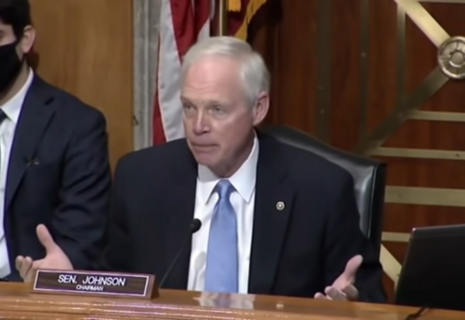 YouTube has removed video footage of a U.S. Senate hearing — at least the second time the platform has censored a Senate hearing.

YouTube took down “two videos of doctors testifying under oath,” Sen. Ron Johnson (R-WI) tweeted on January 27. The testimonies, uploaded to YouTube by Johnson, were during a December 8 Senate Homeland Security Committee hearing that discussed early treatments for COVID-19. Previously, the platform also deleted a video of election complaints from December.

One of the newly deleted videos included an opening statement from the president of the Frontline COVID-19 Critical Care Alliance, Dr. Pierre Kory. He brought forth evidence from a study about the possibility of Ivermectin as a successful treatment for COVID-19. Ivermectin is “a cheap and widely available drug that treats tropical diseases caused by parasites,” according to The Wall Street Journal, but there have also been studies that indicate it could be an effective treatment for COVID-19 as well.

“In the last 3-4 months, emerging publications provide conclusive data on the profound efficacy of the anti-parasite, antiviral drug, anti-inflammatory agent called ivermectin in all stages of the disease,” Dr. Kory said in his statement.

YouTube bans treatment information that doesn’t align with the World Health Organization or other approved sources and considers it misinformation.

“YouTube doesn’t allow claims that contradicts local health authorities medical information about COVID-19, to include guidance on treatment, prevention or transmission guidance,” the company said in a statement to the managers of Sen. Johnson’s YouTube channel, according to Breitbart.

“The censors at @YouTube have decided that the American public shouldn’t be able to hear what senators heard,” Johnson tweeted after receiving notification the videos would be removed. “Apparently, the ‘doctors’ at Google know more about practicing medicine than heroic doctors who have the courage and compassion to actually treat COVID patients and save lives,” he said in another tweet.

Johnson said he was perplexed why the videos removed from his channel remained on other ones. Dr. Kory’s statement had reportedly been viewed more than 8 million times before it was removed from YouTube and other websites, according to the Journal.

Conservatives are under attack. Contact YouTube at (650) 623-4000 and demand that the platform mirror the First Amendment: Tech giants should afford their users nothing less than the free speech and free exercise of religion embodied in the First Amendment as interpreted by the U.S. Supreme Court. If you have been censored, contact us at the Media Research Center contact form, and help us hold Big Tech accountable.