The Real Takeaways From the Cruz-Halperin Interview

Liberal media honcho Mark Halperin really showed his "colors" as he tried to de-Hispanify Sen. Ted Cruz in an interview for Bloomberg Politics over the weekend.

If you like arrogant, condescending, rude, insolent and patronizing Beltway journalism, you may appreciate Halperin's performance. If you are a person of ordinary sensibilities, however, and not so intoxicated with the leftist worldview that you are incapable of dispassionately assessing the segment, you will have a different reaction.

What first struck me about the interview was not so much the objectively asinine questions Halperin asked but his obvious motive and attitude in asking them. Aside from a few throwaways, all of his questions were aimed at exposing Cruz as an inauthentic Hispanic. And as insulting as that is, there is something more noteworthy about it that some are missing in all the hubbub about the interview. 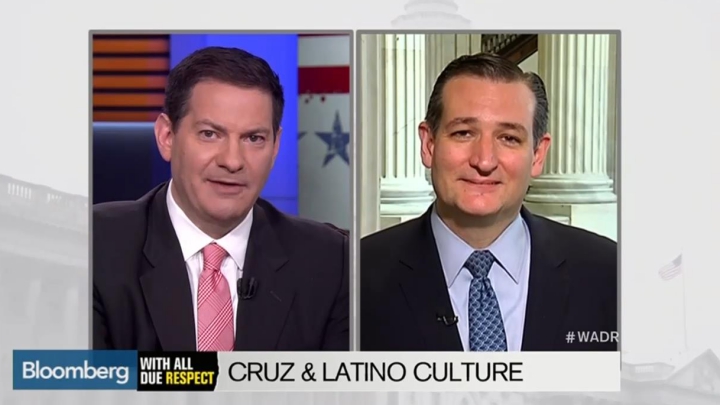 Halperin's unstated premise underlying his questions is that one cannot have a bona fide Hispanic heritage if he doesn't continue to bathe himself in the Hispanic culture and view American politics from a Hispanic prism. If you are ethnically Hispanic but have assimilated into American culture and embrace the American idea of government, you ought not be entitled to lay claim to your ethnicity or to receive support from the Hispanic community. Halperin and his liberal friends apply the same standards to assess African-American candidacies.

Cruz showed extraordinary class and restraint in fielding these boorish questions, but what was even more gratifying to me was that in his answers, he implicitly, though emphatically, rejected Halperin's assumptions, making clear that though he is proud of his ethnicity and considers his Cuban-American father his hero, he is a full-blooded American, proud of the Constitution and the liberties it protects.

At every turn, Halperin was trying to discredit Cruz as a Hispanic by trying to trap him into revealing that he doesn't qualify as a person who could attract Hispanic votes through identity politics, and at every turn, Cruz showed that he could do so indeed if he chose to; he chooses not to because he is about economic growth and opportunity for all Americans. He simply refuses to look at his candidacy as an opportunity to help any targeted groups, including Hispanics. This, my friends, was the takeaway from the interview, because in the end, it was about Cruz, not Halperin, who only confirmed that he's a mini-flyweight charlatan of a reporter.

To experience the full effect of this embarrassing charade, you need to watch the video, but here are some excerpts of the questions and my summary of Cruz's responses.

"What's your appraisal of (Bernie Sanders') candidacy, and can we hear your very good and very respectful imitation of Sen. Sanders?"

Cruz didn't take the bait but did use the opportunity to make a trenchant point: Sanders gets props for his candor in admitting he's a socialist. Hillary Clinton's economic policies are very close to Sanders', and it will be interesting to have her explain whether she agrees with policies he'll describe as socialist and whether they would be good for this country. Bingo.

"Your last name is Cruz, and you're from Texas. Just based on that, should you have appeal to Hispanic voters?"

Again, Cruz refused to fall into Halperin's trap. He didn't say, "Hey, I am really Hispanic." He said he is proud he received 40 percent of the Hispanic vote in his U.S. Senate race in Texas because his personal story resonates with the Hispanic community. And it does so not because he speaks Spanish but because it is an inspiring story of a father who relied on his own personal fortitude to achieve the American dream in a land of opportunity. Cruz's message to Hispanic voters is not "Vote for me because I'm one of you" but "Vote for me because I intend to restore the American dream and expand opportunities for all Americans, regardless of color — with policies that will allow you to unshackle yourselves from the burdensome and destructive policies of the Obama administration and will lead to your liberty and prosperity."

After a few more questions shamelessly trying to flesh out Cruz as a fraud and a faux Hispanic (asking him to identify his favorite Cuban food, Cuban dish and Cuban singer), Halperin asked Cruz whether the Republicans could win a majority of the Hispanic vote — as if that were all that matters in a Cruz candidacy.

Cruz graciously ignored the utter offensiveness and shallowness of the question and asserted that President Obama's policies have "hammered" the Hispanic community and other minorities. Cruz stressed that he is all about expanding growth, opportunity and jobs for everyone and promoting school choice as the civil rights issue of the 21st century because every child, regardless of race, deserves an opportunity for excellence in education. Just outstanding.

What Republicans should learn from this interview — and others — is that despite what they're telling you, Democrats and liberals are genuinely afraid of Ted Cruz because he is a class act, poised and unflappably enthusiastic about the American dream and will pursue an agenda to reverse Obama's "transformational changes" and restore opportunity for all Americans, irrespective of race, creed, color, ethnicity, gender or religion.

How splendidly refreshing — and exciting!

David Limbaugh is a writer, author and attorney. His latest book is "Jesus on Trial: A Lawyer Affirms the Truth of the Gospel." Follow him on Twitter @davidlimbaugh and his website at www.davidlimbaugh.com. To read features by other Creators Syndicate writers and cartoonists, visit the Creators Syndicate Web page at www.creators.com.