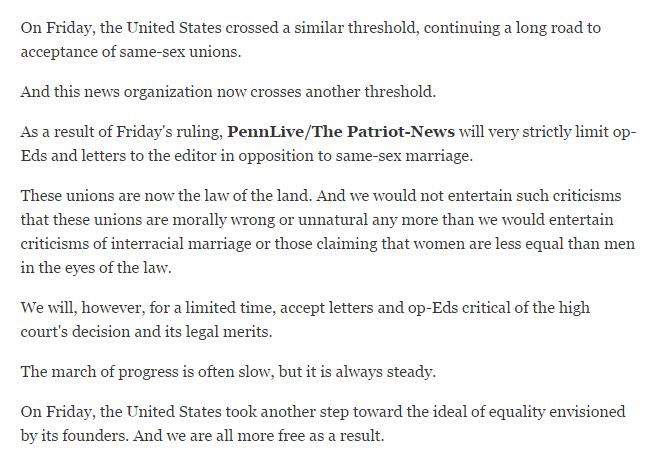 In light of the U.S. Supreme Court’s decision to make gay marriage legal nationwide, the Harrisburg, PA newspaper The Patriot News announced that both they and their online site PennLive.com “will very strictly limit op-Eds and letters to the editor in opposition to same-sex marriage.”

Writing in an editorial published shortly after the Court’s ruling, the leading newspaper in the Keystone State’s capital justified their move by comparing opposition to gay marriage to “criticisms of interracial marriage or those claiming that women are less equal than men in the eyes of the law.”

The paper’s editorial board attempted to ease concerns when it told its readers that they “will, however, for a limited time, accept letters and op-Eds critical of the high court's decision and its legal merits.”

Nonetheless, the paper noted that “this news organization crosses another threshold” and further explained:

The paper concluded with the declaration that the country “took another step toward the ideal of equality envisioned by its founders” as “we are all more free as a result.”

The paper, which is part of the conglomerate Advance Media, went from being a seven-day to a three-day publishing schedule in January 2013 as cost-saving measure.

With such a policy of censorship, it remains to be seen what effect the decision will have on the print circulation and online readership of a newspaper that counts not only Harrisburg as its home base, but surrounding areas that are anchored in staunchly Republican counties.