Following the U.S. Supreme Court’s 6-3 ruling in favor of President Obama in the ObamaCare subsidy case, the “big three” of ABC, CBS, and NBC were out in full force during their Thursday evening newscasts to cheer the “historic ruling” and labeled Chief Justice John Roberts as a “conservative” after having “saved” ObamaCare “from a devastating blow.”

On the CBS Evening News, anchor Scott Pelley assured viewers in an opening tease that “[m]illions of Americans will keep their health insurance as the Supreme Court today saves the President's signature law.”

Leading off the program, Pelley gushed that “[t]he Affordable Care Act was saved from a devastating blow today when the conservative Chief Justice of the United States rescued, for the second time, the largest part of President Obama's legacy.” Seconds later, Pelley quoted the President, who stated Thursday morning that the law is “woven into the fabric of America.”

Justice correspondent Jan Crawford highlighted passages from both Robert’s majority opinion and Justice Antonin Scalia’s “scathing dissent,” but told Pelley that “this is really the last significant legal threat the ObamaCare” as “[t]he fight now moves to the political battlefield.” 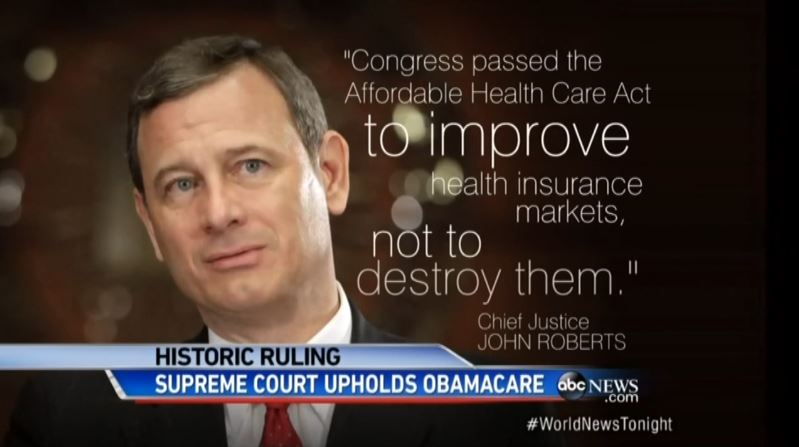 In a random act by the networks, Pelley took a moment before a report by correspondent Nancy Cordes on the Republican reaction to tout the finding of the latest CBS News/New York Times poll: “70 percent said the Supreme Court should allow subsidies for health insurance, which is what happened and for the first time, more Americans favor the law than oppose it. 47 percent to 44.”

Meanwhile, ABC’s World News Tonight anchor David Muir told of “cheers and anger” after “the historic ruling” as “the conservative chief justice help[ed] to save ObamaCare for a second time” as “[m]illions will keep their insurance.”

After giving his first reaction to the decision hours earlier, correspondent Terry Moran explained that “[i]n a stunning 6-3 decision, the Court saved the linchpin of the President's health care law” as Roberts “reject[ed] conservatives’ arguments” against the constitutionality of the ObamaCare subsidies. Moran described the President as being “relieved” when he spoke from the Rose Garden in “declaring that his signature accomplishment is here to stay.”

Covering the GOP’s reaction, chief White House correspondent Jonathan Karl told Muir that Republicans were publically “expressing outrage over this ruling, but privately, many Republican leaders are breathing a sigh of relief” as they would not have to come up with an alternative plan. 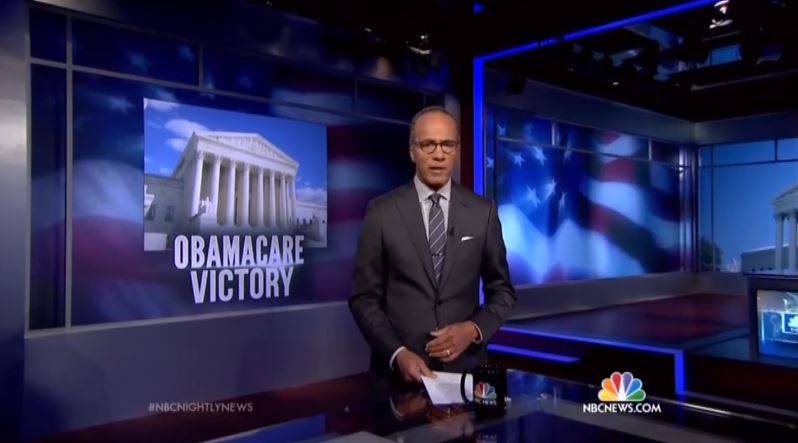 Shifting gears to NBC Nightly News, anchor Lester Holt hailed the “resounding ruling” as ensuring the survival of ObamaCare with “[c]heers on the left” and “anger on the right.” Justice correspondent Pete Williams used the newscast’s opening segment to summarize the decision and how its “the second time the U.S. Supreme Court bailed out ObamaCare” with the majority opinion being penned “by the Court’s conservative Chief Justice John Roberts.”

In explaining the breakdown of the justices, Williams took liberty to also describe Justice Anthony Kennedy as a “conservative”: “A decision by Chief Justice John Roberts joined by another conservative, Anthony Kennedy, and the court's four liberals.”

Williams’s report was followed by a fawning segment from senior White House correspondent Chris Jansing about the so-called benefits of ObamaCare (which I chronicled here) and analysis from Meet the Press moderator Chuck Todd. Like Karl, Todd stated how “Republicans quietly are actually relieved with this ruling...because they didn't want to have to deal with the policy fallout” of a decision that went the other way.

As I reported back on March 4, the networks expressed deep concern about the state of ObamaCare when oral arguments were held with Holt warning of a “death spiral” if the subsidies were ruled unconstitutional that would “doom ObamaCare as we know it.” Over on ABC, contributor Kate Shaw fretted that the effects of a ruling against the administration “could be dramatic” and “immediate.”

When the first ObamaCare case was decided on June 28, 2012, the networks also cheered the move by Chief Justice Roberts to uphold the law. Pelley proclaimed that he was the “man of the hour” with Moran congratulating Roberts for having “stopped” the Court from “becoming just another hyper-partisan place.”