Wednesday’s CBS Evening News gave President Barack Obama a boost during one of its second-half news briefs by touting his handling of a transgender, illegal immigrant heckler who complained about deportations during a White House event promoting LGBT Pride Month.

In a tease to the brief, anchor Scott Pelley gushed: “President Obama smacks down an unruly guest at the White House. That's next.” On the other side of the commercial break, Pelley explained that the President “hosted a reception to observe LGBT Pride Month, but he was interrupted by a heckler demanding an end to deportations.”

Two different portions of Obama’s response were played with the first being a message to the heckler that “[y]ou’re in my house” before admonishing the individual for “eating the hors d'oeuvres” and “drinking the booze” at the event.

Pelley reacted to the clips by telling viewers that the person “was led out” and joked that they “did not get one [a drink] for the road.”

Here’s more on the transgender activist from Dave Boyer of The Washington Times:

A transgender activist heckled President Obama at a gay pride event at the White House Wednesday afternoon, drawing an annoyed reaction from the president.

As the president was speaking at the pride reception in the East Room, a transgender woman interrupted him, shouting, “President Obama, release all LGBTQ immigrants from detention and stop all deportations.”

Mr. Obama responded, “As a general rule I am fine with a few hecklers, but not when I am up in the house.”

The heckler, identified as Jennicet Gutiérrez, is an undocumented immigrant from Mexico who said she could not celebrate while about 75 transgender detainees were still being exposed to “assault and abuse” in custody of the Immigration and Customs Enforcement agency.

The transcript of the tease and brief on the CBS Evening News with Scott Pelley on June 25 can be found below. 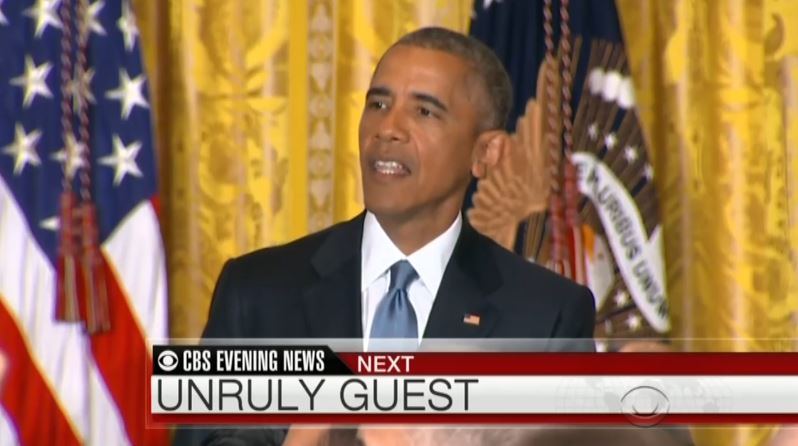 SCOTT PELLEY: President Obama smacks down an unruly guest at the White House. That's next. 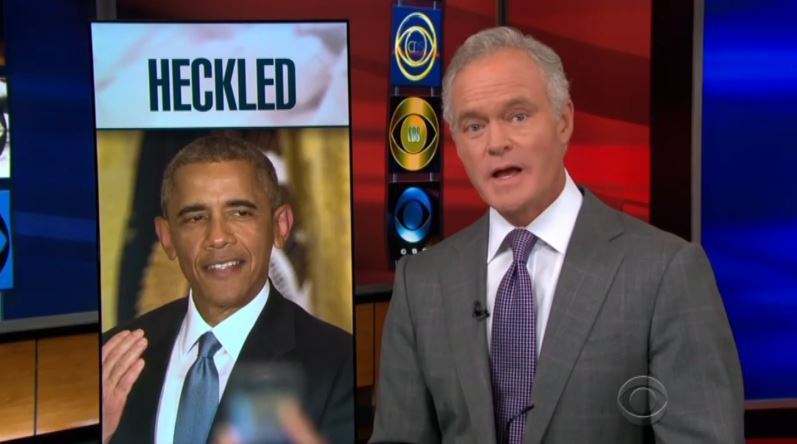 PELLEY: Today, President Obama hosted a reception to observe LGBT Pride Month, but he was interrupted by a heckler demanding an end to deportations. Here's how the President handled it.

PRESIDENT BARACK OBAMA: Yeah, listen. You're in my house. [LAUGHTER AND APPLAUSE] If you're eating the hors d'oeuvres, you know what I'm saying? [LAUGHTER] And drinking the booze. I know that's right.

PELLEY: The heckler was laid out, or was led out, and did not get one for the road.