In Wednesday’s edition of the liberal media spinning for Hillary Clinton, ABC’s World News Tonight chose not to mention any of the recent developments regarding the various Clinton scandals but instead promote her prediction that, unlike previous presidents, her hair would not turn white if she’s elected president.

After previewing George Stephanopoulos’s interview with newly-declared 2016 GOP presidential candidate Rick Santorum, anchor David Muir eagerly transitioned to Clinton as she was “making headlines of her own tonight.”

Noting that “[w]e’ve seen the effect the White House can have on a president,” Muir cited one prominent visual example as being how “[p]eople have long joked about the evolving gray hair.” For Clinton, however, Muir reported that “Mrs. Clinton [was] making a prediction” on Wednesday about that very subject.

While speaking to a group of supporters in South Carolina, Clinton declared that she’s “been coloring” her “hair for years” and, because of that: “You’re not going to see me turn white in the White House.” Muir concluded by simply reiterating that this was Clinton’s “prediction tonight.”

As the Media Research Center’s Scott Whitlock reported earlier on Wednesday, the networks have yet to mention two major developments involving Clinton scandals with the first being an Associated Press story that detailed what some are arguing to be a shell corporation operated by former President Bill Clinton.

In the other new piece of information, an Investors Business Times piece explained on Tuesday how Clinton Foundation donors secured weapons deals with the State Department while Hillary Clinton was secretary of state.

It should be stated that candidates often make jokes on the campaign trail with some to no success in lightening the mood with audiences, but singling out this “prediction” from the former First Lady goes to show how selective the liberal media is in shaping both their preferred and undesirable candidates.

The relevant portion of the transcript from ABC’s World News Tonight with David Muir on May 27 can be found below. 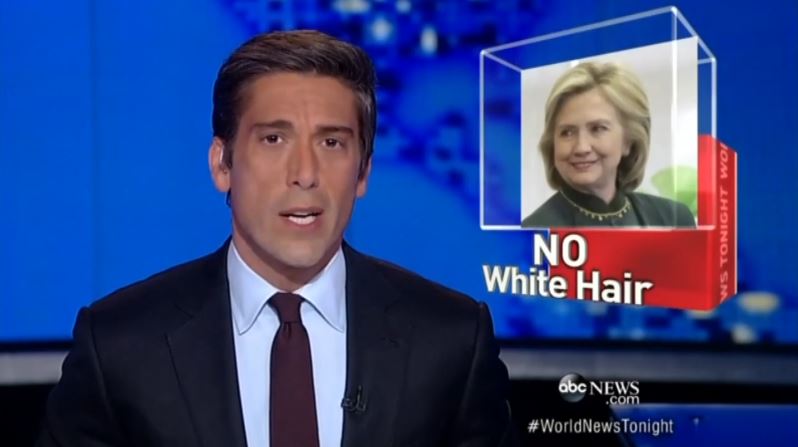 DAVID MUIR: Hillary Clinton, in the meantime, making headlines of her own tonight. We’ve seen the effect the White House can have on a president. People have long joked about the evolving gray hair. Tonight, Mrs. Clinton making a prediction.

HILLARY CLINTON: I've been coloring my hair for years. You're not going to see me turn white in the White House.