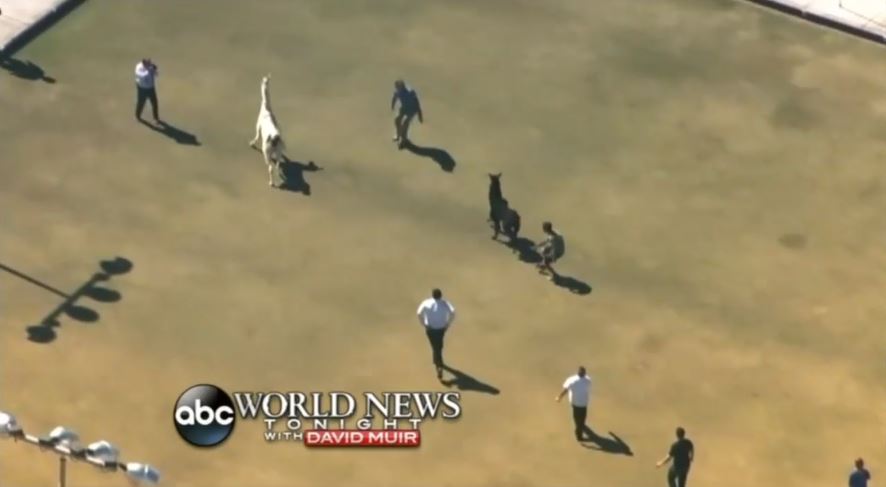 After ABC and NBC failed to cover a front-page story in The Washington Post on Thursday morning about ethics questions surrounding the Clinton Foundation, their evening news counterparts continued the blackout by showing no interest in this story.

Though CBS This Morning gave the story a brief, 32-second item on Thursday morning, the CBS Evening News with Scott Pelley ignored it.

The scant network coverage of The Post story between Thursday morning and evening stands in comparison to the nearly six minutes spent on a case of two runaway llamas in Arizona on the network evening newscasts alone.

The nearly 1800-word story reported, in part, that the Clinton Foundation took in donations from seven foreign governments while Hillary Clinton was Secretary of State with “one donation that violated its ethics agreement with the Obama administration.”

Here’s more from the article:

The Clinton Foundation accepted millions of dollars from seven foreign governments during Hillary Rodham Clinton’s tenure as secretary of state, including one donation that violated its ethics agreement with the Obama administration, foundation officials disclosed Wednesday.

Most of the contributions were possible because of exceptions written into the foundation’s 2008 agreement, which included limits on foreign-government donations.

While the foundation has disclosed foreign-government donors for years, it has not previously detailed the donations that were accepted during Clinton’s four-year stint at the State Department.

When it came to covering the initial story from February 18 that the Clinton Foundation had reaped millions from foreign governments, the network coverage was much the same story with only a single mention on February 19's CBS This Morning that lasted just 20 seconds.

However, when it came to stories such as Hillary Clinton’s latest public appearance or the strange story of two llamas breaking free from an appearance at an Arizona retirement community, the “big three” of ABC, CBS, and NBC were there to enthusiastically cover it.

In terms of the llamas coverage, the CBS Evening News with Scott Pelley led the way with two minutes and 31 seconds (including video from the show’s editorial meeting where the staff watched live coverage) was followed by NBC Nightly News at one minute and 51 seconds with ABC’s World News Tonight with David Muir in third at one minute and 36 seconds.