In his first night subbing for the embattled Brian Williams, Lester Holt took time before the first commercial break on Monday’s NBC Nightly News to again inform viewers of the reason for Williams’s absence.

Holt used similar wording that he did on Saturday's show to describe the situation by making clear at the onset that he wanted “to take just a moment tell you where Brian is tonight” before reading a few portions of Williams’s statement where he announced that he would be taking “several days” off from the anchor desk.

As for the reason given why Williams had made the move, Holt gave a nearly identical reason from two days earlier, with it being due to “questions” that have emerged “over how he recalled certain stories he’s covered.” Concluding the 19-second brief, Holt added that Williams will “be off while this issue is dealt with.”

When the show began, both the on-screen graphics and recorded opening announcement from actor Michael Douglas remained the same as before (since Douglas began in 2007).  Holt then greeted viewers by stating that he was “in for Brian” and “[w]e’re glad you’re here.”

With Williams being ruled out of the anchor desk for at least the next few days, one will see whether NBC Nightly News can indeed remain the most-watched network evening newscast over the second-place show in ABC’s World News Tonight with David Muir and the CBS Evening News with Scott Pelley in third place.

The relevant portions of the transcript from NBC Nightly News on February 9 can be found below. 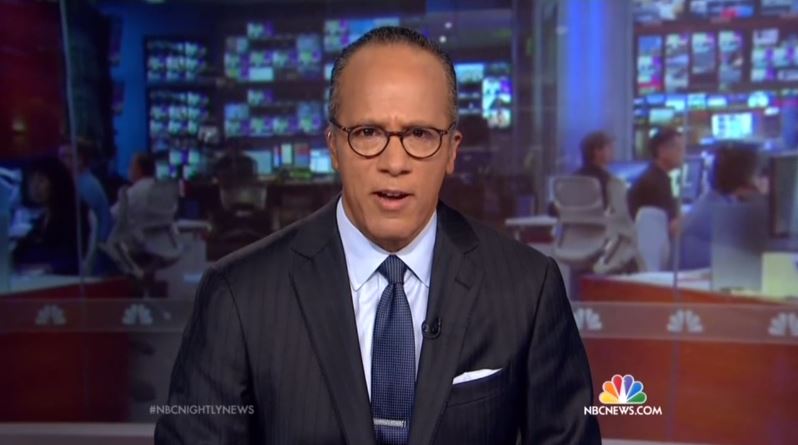 HOLT: We want to take just a moment to tell you where Brian is tonight. In a message to his colleagues over the weekend, Brian told us he's taking “several days” off this broadcast amid questions over how he recalled certain stories he covered. “In a career spent covering the news,” Brian told us, it's clear he's “become...too much a part of the news.” He'll be off while this issue is dealt with.