On Thursday night, NBC continued to shower praise in the direction of President Barack Obama’s move to normalize relations with the communist country of Cuba and brush off any criticism of the policy shift.

NBC Nightly News had two additional segments on Cuba that, with a tease in the program’s opening, totaled 5 minutes and 12 seconds, but only 28 seconds of that involved mentioning those against the move. [MP3 audio here; Video below]

Leading the way in the first segment was chief foreign affairs correspondent and MSNBC host Andrea Mitchell, who began by spotlighting one Cuban-American family where the youngest generation was excited about the change (with no airtime for her family that are against it.

After playing a brief soundbite of Republican Senator Marco Rubio (Fla.), who has been very vocal about his opposition to the President’s decision, Mitchell immediately brushed him aside to push a White House talking point: “But President Obama is arguing that decades of isolating Cuba should end.”

Mitchell also took time to list the major U.S. businesses and corporations that have already expressed interest in doing business in Cuba and then continued to positively portray the White House and State Department while putting a negative spin on Cuban-Americans and members of Congress that have a different position:

The Assistant Secretary of State will be going to Havana leading a delegation next month followed shortly afterward by Secretary Kerry trying to open the door to Cuba. Even as Cuban-Americans in Congress and other critics try to keep it shut.

Following the conclusion of Mitchell’s segment, Williams then went to Mark Potter in Havana, Cuba, where he blamed the depressing state of Cuba’s economy on the U.S. embargo during Wednesday’s NBC Nightly News. Needless to say, Thursday’s report wasn’t balanced either.

Both at the beginning and end of his report, Potter’s live shot featured him standing next to a 1956 Chevy Bel Air, which his tour guide used to shepherd him around Havana on Thursday for sight-seeing and gushing over Cuba’s usage of antique cars as transportation.

He also reiterated the hope by Cubans that American businesses flocking to Cuba would result in a fusion of cash to fix the “block after block of dilapidated buildings.”

The transcript of the segment that aired on NBC Nightly News on December 18 is transcribed below. 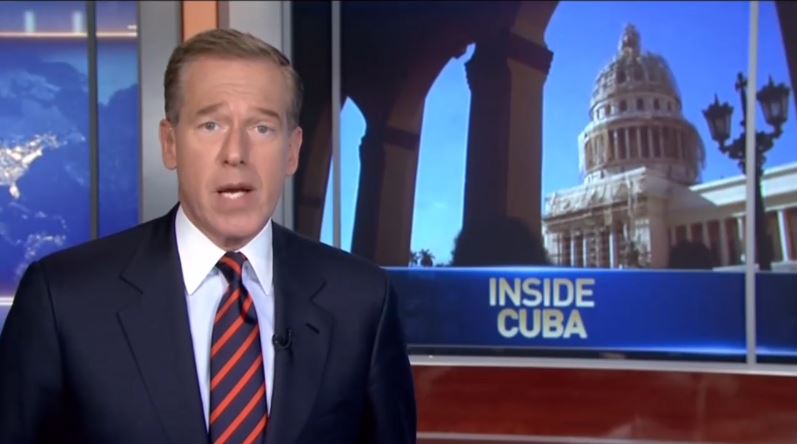 BRIAN WILLIAMS: Inside Cuba, while some Americans remain suspicious, Cubans seem to embrace a new era of relations with the U.S. and the change can already be felt in the streets.

WILLIAMS: For something that happened yesterday and was over 50 years in the making, the effort to normalize relations with Cuba sure seems to be moving fast. Those against it call it appeasement giving in to an avowed enemy. The President says all those sanctions aren't about to bring about any other result and today came the reaction to the proposed seismic shift in U.S.-Cuban relations. We begin our coverage tonight with our chief foreign affairs correspondent Andrea Mitchell.

UNIDENTIFIED CUBAN-AMERICAN #1: Nothing is going to change in Cuba. The citizens are just going to be thrown in jail. 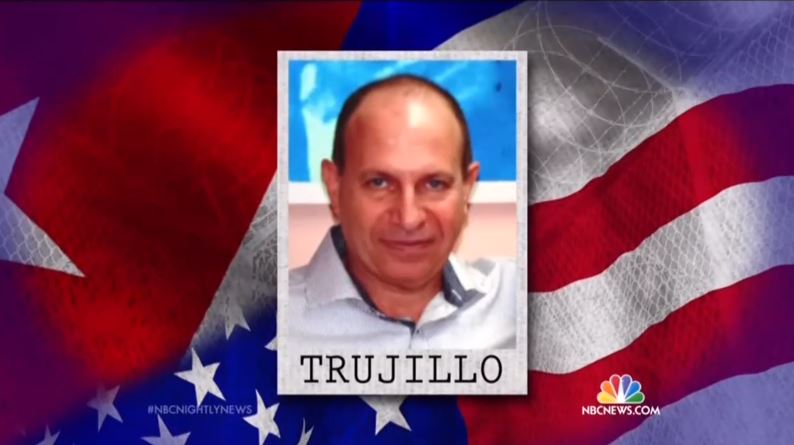 MITCHELL: Three generations of the Castaneda family all against the Castros, but 28-year-old Elena is eager to an opening from the island from which her parents and grandparents escaped.

ELENA CASTANEDA: I have dreamed of Cuba for years. I mean, Cuba is everything.

MITCHELL: Now exchanges will be possible because of a spy trade. A U.S. Mole, Rolando Sarraff Trujillo, is safely in the U.S. Three Cubans jailed in America were given a heroes welcome in Havana by Raul Castro and Raul Castro could even be invited to the White House.

WHITE HOUSE PRESS SECRETARY JOSH EARNEST: The President has had the leaders of both Burma and China to the United States and for that reason, I wouldn't rule out a visit from President Castro.

REPUBLICAN SENATOR MARCO RUBIO: Their Principles are dictatorship, repression, jailing of your opponents and exiling the rest.

MITCHELL: But President Obama is arguing that decades of isolating Cuba should end.

DEPARTMENT OF HOMELAND SECURITY SECRETARY JEH JOHNSON: The country itself has changed. The world has changed and, so, this direction that the President has put in motion is probably long overdue.

MITCHELL: Before long the U.S. Intersection in Havana, the scene of those huge anti-American rallies under Fidel Castro will become a full-fledged U.S. Embassy, paving the way for U.S. companies eager to jump in: Caterpillar, Marriott, JetBlue, Mastercard, Western Union, Coca-Cola, GM, Major League Baseball, as soon as new regulations are written. 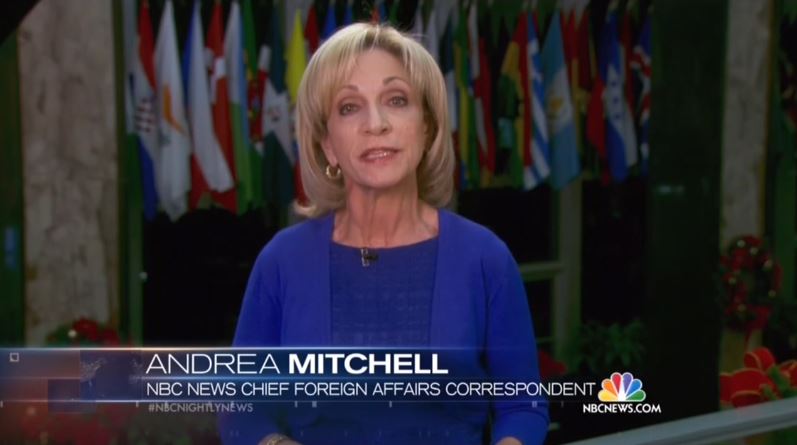 MITHCELL: The Assistant Secretary of State will be going to Havana leading a delegation next month followed shortly afterward by Secretary Kerry trying to open the door to Cuba. Even as Cuban-Americans in Congress and other critics try to keep it shut. Brian.

WILLIAMS: Andrea Mitchell at the State Department tonight. Andrea, thanks. Now let's go south for the reaction from inside Cuba where changing times appear to be on the way. Where the door to the U.S. and the outside world closed long ago, long before many of them were born. NBC's Mark Potter is in Havana tonight with one of the classic forms of transportation in that city. Mark, good evening.

MARK POTTER: Good evening, Brian. We talked to a lot of people today and we drove all around Havana and we took our trip in the vintage style that has helped make this city famous. Hola, Armando. Our tour guide is Armando Pruna, who makes his living driving tourists around Havana in his fully restored 1956 Chevy Bel Air. We begin on the famous coastal road, the Malecon, where Pruna says he has high hopes that normalized U.S.-Cuban relations will bring even more visitors and money here. 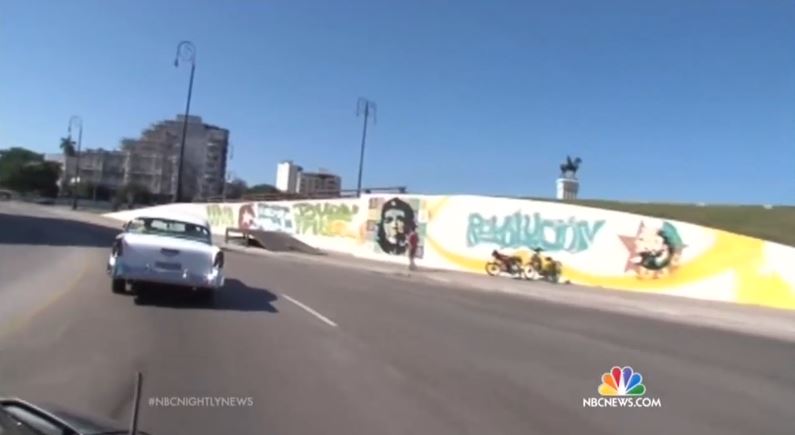 POTTER: Around the bend, along the harbor, we come upon Havana's central park where the owners of these vintage American cars have used Cuban ingenuity for years to keep them running. The trade embargo has kept them from buying American parts since 1961. They all hope that changes soon. [TO CAR OWNER FABIO PINERO] Buying American parts in Cuba, would that be a good thing for you? Would you like that?

CAR OWNER FABIO PINERO: Yes, I’d like to very much.

POTTER: Then we're back on the Malecon. This building coming up right here is the U.S. Intersection. We don't actually have an embassy in Cuba. Outside, a long line of people seeking visas to visit the U.S. or move there. Some say fewer Cubans would leave if better relations improve the stagnant economy here.

POTTER: A few miles away in the old center of town, we see another side of Havana. Block after block of dilapidated buildings. Santros Del Rios-Sanchez shares his home with three generations of family. He's happy to hear the U.S. and Cuba are trying to make amends.

SANTROS DEL RIOS-SANCHEZ: For me, for my baby, for my family.

POTTER: Down a neighboring street and up a rickety set of stairs a surprising jewel, the famous La Garita Restaurant where the Oscar-winning film Fraser y Chocolate was filmed. The owner, Enrique Nunez, says decades of U.S.-Cuban discord have been a huge waste, but change is coming. 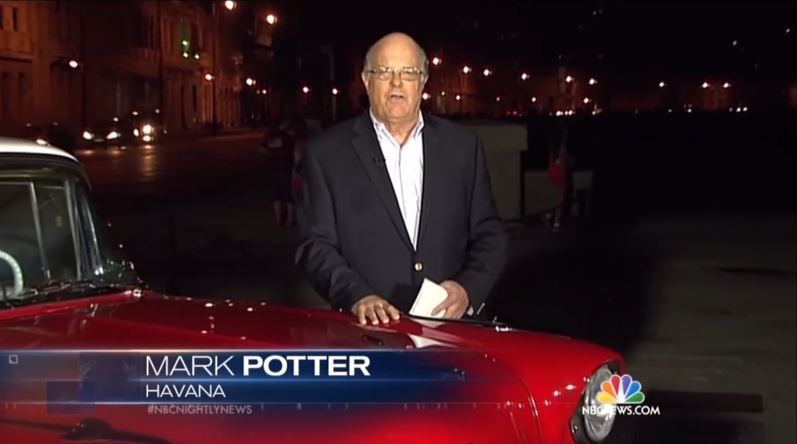 ENRIQUE NUNEZ: I believe that this door that is open will be another way more possibility for the future.

POTTER: They also hope opening that door will bring in such things as food and computers and allow Cuban baseball players to join U.S. Major League Teams without having to defect. Brian.

WILLIAMS: Mark Potter in Havana tonight. Thanks to you and that beautiful Bel Air for our tour.