On Tuesday, NBC Nightly News channeled President Barack Obama from the day after the midterm elections and pointed to the low voter turnout for the election that saw Republicans gain control of the United States Senate as well as make additional gains in the House of Representatives.

In a news brief, anchor Brian Williams highlighted the latest turnout estimate for “last week’s wave election for the GOP” as being “very bad” at “36.3 percent.” Williams noted that it would be the lowest in both “the modern era” and “since 1942, when a unified and preoccupied nation” was engaged in World War II when only 33.9 percent came out to vote.

Then, for some reason, Williams brought up the voter turnout in the presidential election of 2008, which was 62 percent. This comparison came despite his assertion at the beginning of the 29-second brief that “midterm turnout is usually bad.”

Making a judgment about the overall percentage of voter turnout and comparing one midterm election to another is particularly deceiving and especially when one considers the turnout in individual states.

The reason for that is some states had various combinations of Governor’s races, Senate races, or just House seats and local elections to vote on and turnout can be affected based on what the stakes are for voters.

As my colleague Tom Blumer pointed out on November 6, turnout was actually up in 13 states on November 4 compared to 2010 and many had competitive Governor’s and/or Senate races.  A few examples of such states included Alaska, Arkansas, Louisiana, Maine, and Wisconsin.

On the flip side, states without competitive Governor’s and/or Senate races (or on the ballot at all) did indeed report lower turnout compared to 2010. States that fell into that category included Alabama, California, Delaware, and Oklahoma.

The full transcript of the news brief from NBC Nightly News on November 11 can be found below. 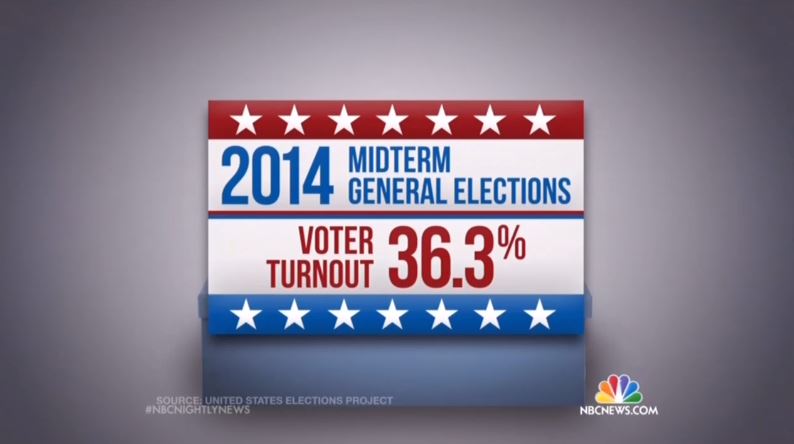 BRIAN WILLIAMS: Now to last week's wave election for the GOP and while midterm turnout is usually bad, last week's was very bad. There's a new estimate that the final numbers will show voter turnout was 36.3 percent, lowest in the modern era. The lowest since 1942, when a unified and preoccupied nation was fighting a World War. By comparison, turnout was about 62 percent in the Obama election of '08.