On Monday night, ABC and NBC offered segments on Monica Lewinsky’s first public comments in years that came during a conference in Philadelphia for millennials by Forbes and explained how she was the first victim of cyberbullying during her affair with then-President Bill Clinton in the 1990s.

During the segment that aired on NBC Nightly News, NBC’s Andrea Mitchell declared that "the timing” of Lewinsky speaking out now (in hopes of becoming an advocate against cyberbullying) “couldn’t be worse for Bill and Hillary Clinton.” [MP3 audio here; Video below]

Mitchell stated that Lewinsky’s first public speech comes “[s]ixteen years after the impeachment scandal as Hillary Clinton decides whether to run” for President in 2016 and detailed how Lewinsky viewed herself as “patient zero” in the growing problem of cyberbullying as “her affair with the President was exposed on a then-fledgling website, The Drudge Report.”

Also included in the story was a comment from USA Today Washington bureau chief Susan Page, who opined that: “I think no one was probably sorrier to hear Monica Lewinsky's name raised again than Hillary Clinton. An extraordinarily painful period of her life. One she's moved on from.”

The NBC News chief foreign affairs correspondent and MSNBC host concluded with some more spin when it came to the Clintons, lamenting how “memories of the Lewinsky affair had faded, at least until now” as “Bill Clinton is now the most popular Democratic surrogate on the campaign trail.”

Over on ABC World News Tonight with David Muir, ABC News chief White House correspondent Jonathan Karl provided only a slightly more-balanced take on the story, providing no pro-Clinton spin. During his one-minute-and-38-second story, Karl made no mention of Hillary Clinton or former President Bill Clinton’s frequent appearances on the campaign trail ahead of the November midterm elections.

Karl hyped that Lewinsky joined social media by creating a Twitter account on Monday and while it was her “first speech,” he mentioned that “it won't be her last” as she told the audience that it was the “beginning of a full-blown campaign against cyberbullying.”

The relevant portions of the transcript from NBC Nightly News on October 20 can be found below. 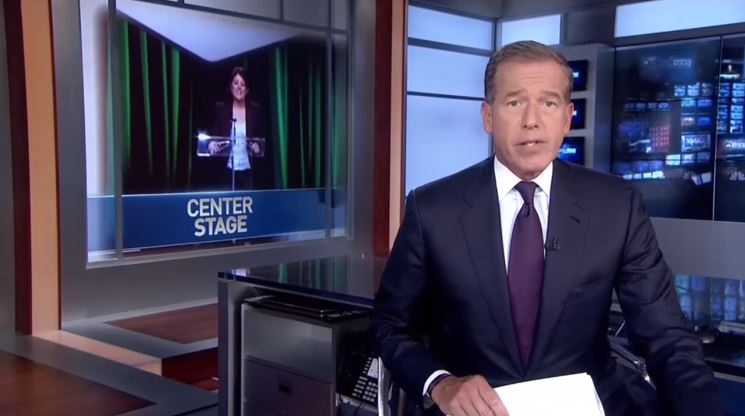 BRIAN WILLIAMS: Center stage, Monica Lewinsky speaks publicly for the first time in years. Tonight, why now, her message and her mission.

WILLIAMS: And still ahead on our Monday broadcast, the name first heard in the '90s: Monica Lewinsky, taking the stage, speaking to a live audience for the first time in years. Tonight, why she says this is the time to speak up. 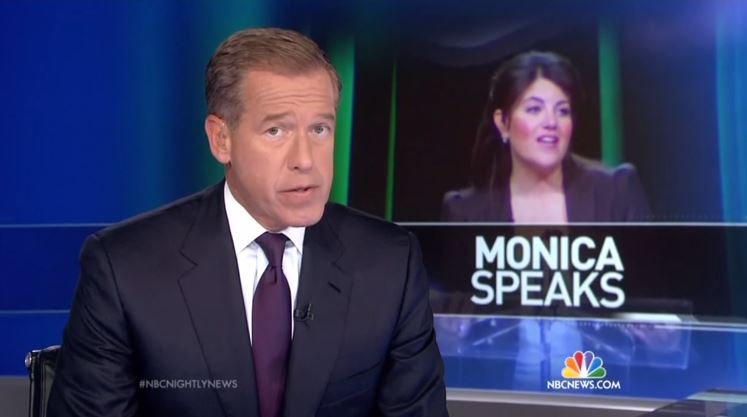 WILLIAMS: There was that photo spread and accompanying interview in Vanity Fair awhile back, but other than that, Monica Lewinsky has largely opted to live out her private life in private. We are not used to seeing and hearing her speak, so when she did this morning in Philadelphia, it drew the attention you would expect. NBC's Andrea Mitchell has the story.

MONICA LEWINSKY: My name is Monica Lewinsky, though I have often been advised to change it.

ANDREA MITCHELL: Sixteen years after the impeachment scandal, as Hillary Clinton decides whether to run, Monica Lewinsky gave her first public speech, explaining herself to an audience of millennials who know her mostly from rap lyrics.

LEWINSKY: Thank you, Beyonce and Eminem, and Nicki Minaj.

LEWINSKY: A 22-year-old intern in the White House and more than averagely romantic. I fell in love with my boss in a 22-year-old sort of way. It happens.

MITCHELL: Calling herself the first victim of cyberbullying, before Google, before Twitter, Facebook, Instagram and Snap Chat, Lewinsky described how her affair with the President was exposed on a then-fledgling website, The Drudge Report.

LEWINSKY: Overnight, I went from being a completely private figure to a publicly humiliated one. I was patient zero. 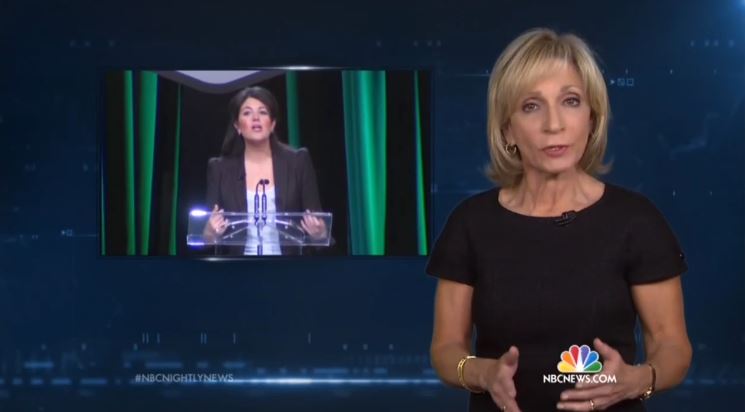 MITCHELL: Lewinsky gave her first interview in years to Vanity Fair in May and spoke to National Geographic this summer. Why go public again? She says to campaign against cyberbullying, but the timing couldn't be worse for Bill and Hillary Clinton.

USA TODAY WASHINGTON BUREAU CHIEF SUSAN PAGE: I think no one was probably sorrier to hear Monica Lewinsky's name raised again than Hillary Clinton. An extraordinarily painful period of her life. One she's moved on from.

MITCHELL: Bill Clinton is now the most popular Democratic surrogate on the campaign trail as memories of the Lewinsky affair had faded, at least until now. Andrea Mitchell, NBC News, Washington.

The relevant portions of the transcript from ABC World News Tonight with David Muir on October 20 are transcribed below. 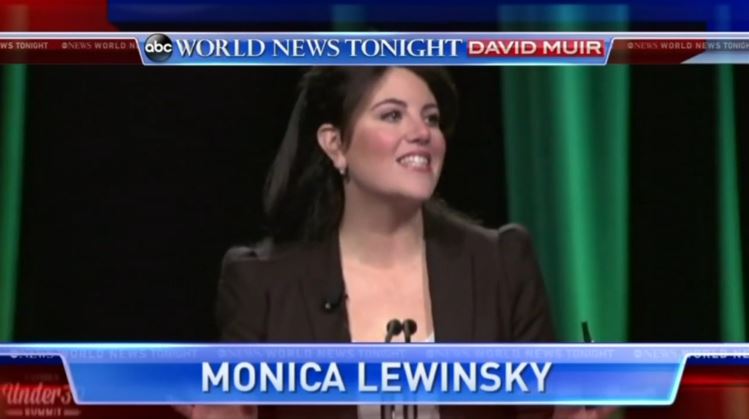 DAVID MUIR: Monica Lewinsky in her own words tonight. What she said today in front of a crowd we have never heard before.

MUIR: Still much more ahead on World News Tonight this Monday. Monica Lewinsky in her own words. What we never heard before. What she revealed today about her feelings for former President Clinton, she said it in front of an audience and you'll hear it for yourself, coming up next.

MUIR: Next tonight here, Monica Lewinsky in her own words what she said today in front of an audience about how she felt about President Clinton. Here's ABC's chief White House correspondent Jonathan Karl.

JONATHAN KARL: The former White House intern is now 41, and for the very first time, giving a public speech about the love affair that almost brought down a president.

LEWINSKY: I fell in love with my boss in a 22-year-old sort of way. It happens, but my boss was the President of the United States.

KARL: Speaking to the Forbes Under 30 Summit, Lewinsky portrayed herself as the first real victim of cyberbullying. 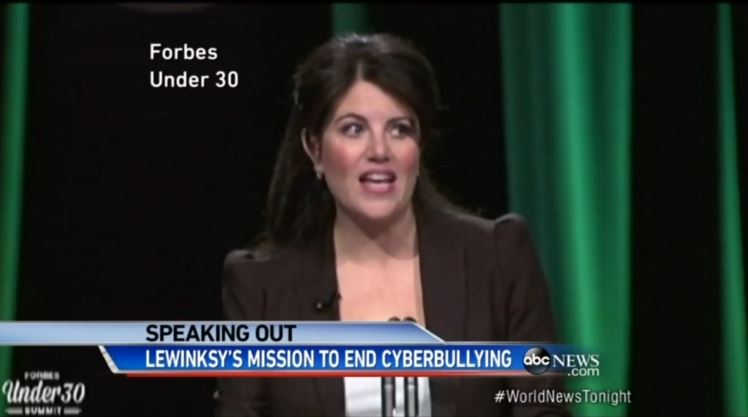 LEWINSKY: I was patient zero. The first person to have their reputation completely destroyed world wide via the internet.

KARL: And today, another first for Lewinsky. She's opened up a Twitter account, more than 35,000 followers already in less than 12 hours and she has a new personal calling: Fighting online abuse and bullying, something she wrote about in Vanity Fair over the summer.

LEWINSKY: What I want to do now is help other victims of the “shame game” survive, too. I want to put my suffering to good use and give purpose to my past.

KARL: This may have been Monica Lewinsky's first speech, but it won't be her last. She says this is a beginning of a full-blown campaign against cyberbullying. David?