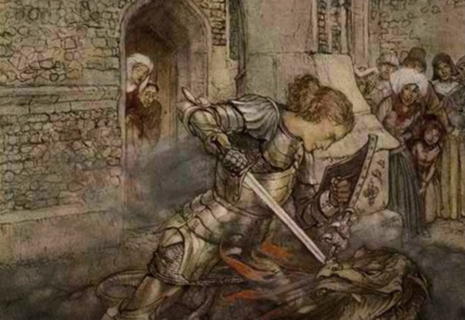 In the left’s worldwide crusade against all that is good and holy, their latest victim is none other than the legend of Saint George, the dragon slayer. The University of East Anglia’s (UEA) professors have issued trigger warnings regarding Saint George, as the Daily Mail reported last Saturday.

The university professors tell UEA undergraduates that the legend of St. George contains “descriptions of and allusions to torture and violence leading to his death” and “instances of discriminatory language, particularly with reference to ethnicity and religion.” So, it should come as no surprise that a medieval poem by 15th-century monk John Lydgate might not conform to liberal sensibilities.

The university has been issuing these warnings to other old writings as well, such as the work of Victorian poet Robert Browning, that “deal with “toxic masculinity” and “implied/explicit misogynistic violence.” Ironically, they issued this warning even though Browning was a “champion of women’s rights” according to Daily Mail.

Just a needless bubble-wrapping of history. Does UEA think their students are children?

“Quite honestly, if students do not know that in medieval times they were quite violent and had very different attitudes towards race, then they are not fit to be at university,” former UK Conservative Party MP Ann Widdecombe said, summing up the situation. “The mere fact that it’s a medieval poem should warn them they may not find nice, comfy 21st Century language there.”

Professor Frank Furedi from the University of Kent also commented on the trigger warnings.

“People are going through our history looking for things to be offended by,” Furedi said. “It is not about genuine pain or hurt, it is about distancing England from its traditions and its past.”

Both professors hit the nail on the head. It’s unnecessary and a complete infantilization of students. History shouldn’t be bubble-wrapped because liberals want to baby students. Academia is infected with liberalism, and this incident is the latest symptom.