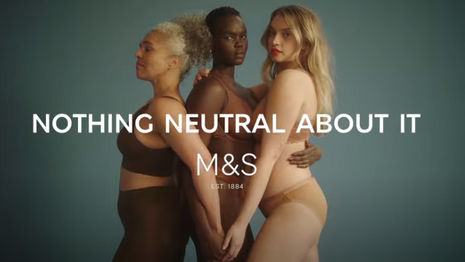 Ladies, is your underwear down with the struggle? Err, we mean, does your intimate apparel broadcast your politics? Err ...

British retail giant Marks & Spencer is honoring the memory of BLM Martyr George Floyd by adding five new shades to its collection of neutral or nude-colored underwear. This “inclusive” range is inspired by the “global conversation on racial inequality” prompted by the tragic death of Floyd while in police custody.

M&S is adding darker shades to the collection bearing gemstone names like Topaz, Amber, and Rich Quartz, adding further significance to “things that are special and precious.” Up to this point, the collection has focused too much on paler complexions. This failure to accommodate darker skin-tones is “inconsistent and inadequate for all ethnicities,” said M&S. “The terms nude and neutral have generally been used for lighter skin tones,” but no longer is that the case, especially with this new “bold and relevant” campaign called “Nothing Neutral About It.” That title in itself seems to be a politically charged statement.

The director at M&S lingerie, Laura Charles, says the decision comes after “customers and colleagues told us we hadn’t got it right when it came to colour -- both in the choices available and the way we talked about the neutral shades.” Furthermore, there is “a responsibility to ensure what we sell makes all of our customers feel fantastic.” The brand, which is the UK’s largest lingerie retailer, says “The global conversations around race and equality over the last 12 months spurred us to go faster,” and as a result made this politically correct creative choice.

Every facet of daily life has become steeped in politics. Regardless of whether or not anyone can tell what color your underwear are, you’re not a true anti-racist and social justice warrior unless you police your under garments. Haters will say this is excessive, but that is just pure ignorance and bigotry. Some of the like have made their racism known to the world, by trolling the M&S’s new George Floyd inspired line on Twitter. One user tweeted “do you have to be off your knackers on amphetamines and hold pregnant women at gunpoint to wear them?” Another referenced Floyd’s criminal history while tweeting, “Is M&S going to make bulletproof maternity wear ‘inspired by George Floyd” too?” “You can only buy it with fake bank notes and wearing it gives you a Fentanyl high?” savagely comments one twitter user.

Apparently, the lingerie market is the new arena for political commentary. Just this past week, Victoria’s Secret practically doomed its already struggling business with its super woke marketing decisions, and now M&S is doing the same. Let’s hope it backfires for both.