SHE’S BACK: 8th-Grader Shames School Board - ‘How Evil Can You Be?’ 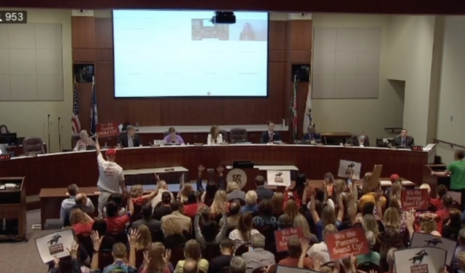 Jolene Grover, the 8th Grade student who went viral this month after calling out the Loudoun County School board for its dangerous transgender policies and CRT indoctrination, was back again at the heated June 22 school board meeting. Once again, she scorched panel members.

On June 8, Grover denounced the LCPS proposed policy 8350 that will compel staff and students to refer to confused and misled individuals according to their preferred pronouns. The policy would also allow the intermingling of biological boys and biological females in bathrooms and locker rooms that correspond to their desired genders.

Grover, a young student who will have to live with these ridiculous and even dangerous rules, defended her rights and those of her classmates once more, saying “Being a girl is not all in my head. Boys who identify as girls are no different from boys who identify as boys except in their feelings about themselves. But feelings are not why we have separate bathrooms. We have separate bathrooms because of what our bodies do in them. Bodies matter."

Grover rejected the leftist school board’s promotion of gender ideology. “Calling girls bigots because they don't want to use a toilet in a stall next to a boy or get undressed next to a boy is cruel and wrong,” she said.

“It is embarrassing enough for a girl to change a pad knowing all the other girls hear the crinkle of the packaging, but telling her that she must be okay doing it in the presence of boys because their preferred pronouns are “she/her.” She charged them directly, “How evil can you be?”

She concluded “Girls bathrooms do not exist to validate identities.”

Her words prompted cheers from the audience, which were immediately shushed so as not to induce the shut down of public comment, which the school board had already threatened.

(Not too long after, however, the board did end public comments with those of Senator Dick Black. The Virginia Senator blasted the school board in a final climactic moment  that evoked major applause and cheers from the crowd that could no longer contain its excitement.)

Jolene Grover is a courageous young girl who should be exalted for her fearless witness before the "wokest school board in America."