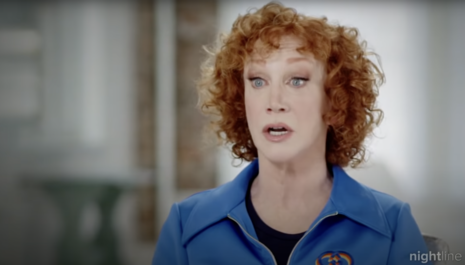 Taco Tuesday was quickly ruined by another washed up celebrity’s attempt to virtue signal.

Let’s get a refresher on who this psycho lady is anyways. In 2017, Griffin posted a photo of herself holding a decapitated Trump head and then reposted it in January 2021 when President Joe Biden took office.

Last month, Griffin posed next to an Ex-DC cop where the pair held “F**K TRUMP” mugs.

She was also one of many celebrities to celebrate the FBI raid on Trump’s Mar a Lago resort.

It’s very obvious that Griffin is a nut. Her claim that if you don’t vote Democrat then you want a civil war is very on brand for her.

As a result of her Tuesday afternoon dumbassery, Twitter users blasted her claim.

Kathy Griffin’s parents really missed the mark by not naming her Karen.

Civil War just because she doesn’t get her way?

Kathy Griffin’s parents really missed the mark by not naming her Karen.

Civil War just because she doesn’t get her way?

Unsurprisingly, Twitter hasn’t done anything to Griffin’s tweet. It didn’t censor her, ban her or delete the tweet as far as anyone can tell. Meanwhile conservatives are censored left and right for right-leaning content.

I bet that if Griffin was a conservative and flipped her statement, she’d be censored by Twitter and the latest victim of cancel culture. But, since she's on the left side of the isle, her immunity is secured.