Miami School Board Rejects Textbooks About Abortion And 'Pulling Out'

Well this is shocking! A school board just rejected wokeism ... for now. 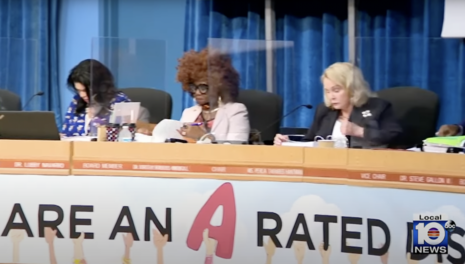 The Miami-Dade County School Board just reversed a previously made decision to approve sex-ed books for students. The vote was 5-to-4 against using the textbooks! Thank goodness.

Earlier this year the textbooks were approved by the board and were set to be used during the upcoming school year but the board changed their minds and halted those plans.

Supposedly 42 people showed up to the school board meeting to discuss the utilization of these textbooks for students. Of the 42, 38 were in favor of them, but the board voted against using the textbooks as they currently stand.

Alex Serrano is the president of a group called County Citizens Defending Freedom who objected to the textbooks. Serrano even pulled his children out of public school in opposition to the curriculum.

“We are not against sexual education, we are not against human reproduction and disease education books, we are for statutory compliance, age appropriateness in the content, factual content, and compliance with parental rights as protected by Florida state law,” he said. He later added, “matters related to their sexuality, to their health, to their human reproduction, to abortion, to access to plan B pills, matters related to contraceptive methods.”

Serrano’s group provided a list of concerns about the textbooks, The Blaze reported.

According to the scanned pages, books provided information about “pulling out” and even explained the difference between sex and gender. Ah! Indoctrination at its finest. One page talked about what people do with unplanned pregnancies. It said that some “choose to place the child for adoption, or in some cases, end the pregnancy.” As a cherry on top, one book also presented questions for kids to ask doctors like “Will you tell my parents or others the information I tell you?” and “If I want to, can I talk to you without my parents in the room?”

Serrano's concerns are spot on. There are certain things that middle and high schoolers should learn about. But there are also many things that are undeniably inappropriate for kids. No 13-year-old needs to learn about “pulling out.”

A different parent, Marika Lynch claimed that the vote against the books “is an attack by right-wing extremists,” who are “trying to censor books all across the country.”

Oh so if you don't want your kid indoctrinated, you're a "right-wing extremist." Got it.

The book does have inappropriate content in it and shouldn't be distributed. That's the bottom line.

The school board will be going through new material before the school-year starts. Hopefully stuff that kids should actually learn about and not this woke crap.