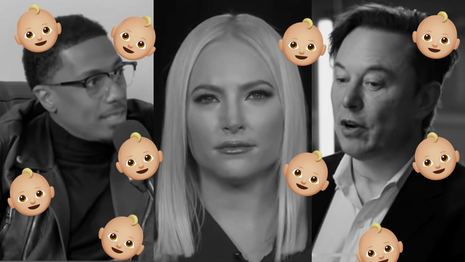 On July 7, Musk, the richest person in the world and Tesla CEO tweeted his enthusiasm for having more kids. TV host, rapper, and comedian Cannon replied in agreement.

Right there with you my Brother!✊🏾

McCain called the exchange “the creepiest tag team tweet thread in history” and compared the mentality to that of a cult leader.

This 'impregnate the planet' mentality is creepy and comes off like the actions of a cult leader more than an altruistic person who wants to expand their family and save the planet.

McCain also mentioned the abundance of children that the pair have. Musk has a total of now ten children and Cannon is expecting his 8th child soon. While they both have the finances and resources necessary to support such large families, McCain argued that most Americans do not relate.

“While Americans are trying to figure out how to pay for gas and groceries, the average cost of a surrogate can range from $90,000 to $130,000 depending on the individual arrangements,” she wrote.

Both Musk and Cannon have, unfortunately, stereotypical Hollywood families. They’ve got kids with multiple different baby mamas and many of them at that. McCain stressed the importance of having a more traditional family unit when she encouraged having “one baby mama, one marriage, with a lot of children living under one roof.” Neither Cannon nor Musk have that.

McCain was also not a fan of Musk’s “subtle shame factor.” She said it felt “impersonal, fatalistic, and dystopian” and thought Musk was implying “that if we all don't have as many children as our bodies are capable of, we are not addressing some existential crisis of population decline.”

Can’t argue with her there. People should get pregnant if and when they’re ready to, but you have to give Musk and Cannon credit too. In a world that has celebrated the slaughter of the unborn so publicly as of late, at least these celebrities support new birth!

Honestly, it wasn't as creepy as McCain pointed out and, judging by many of Musk’s other tweets, one could bet he intended the tweet to be taken more lightly than McCain did.