If (hopefully when) Roe v. Wade is overturned, Big Tech may be able to profit by tracking abortion related content online and selling that information to interested parties -- presenting companies with a choice between their progressive ideology and their bottom lines. 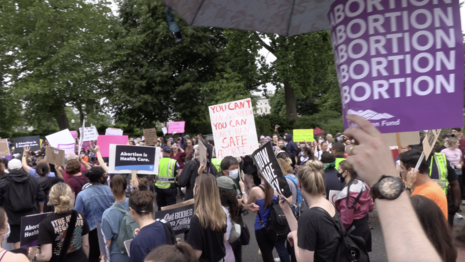 Slate posted its “A Word … with Jason Johnson” podcast where the host interviewed tech analyst and artificial intelligence expert, Bärí Williams, on May 13. The two talked about the silence of many tech companies and how the companies could benefit from data tracking within the topic of abortion.

Johnson started the conversation by asking William’s take on companies that cover employees travel fees to obtain out of state abortions when residing in areas where abortion is or may become illegal.

Recently, many Fortune 500 companies have come out to stand in solidarity with abortion seeking staff by offering these “employee benefits.” With that however, Williams pointed out that having to tell your boss you want to go get an abortion is a rather personal affair.

That sounds all great on the surface until you think about the fact of like, what is it that I have to tell Amazon about my personal business in order to get them to help facilitate me getting an abortion?

This segued into the topic of privacy online. The point Williams harped on numerous times is that “the internet is written in ink, it is not written in pencil” which may be why tech companies are hesitant to blatantly share their support or opposition on an issue with a magnitude as large as abortion.

The host asked Williams about Big Tech companies being progressive or not. (Spoiler: they are and there are receipts.) Williams answered that Big Tech are “Socially liberal to an extent, but fiscally conservative,” and added that “you also cannot deny the fact that they are able to decide that if push comes to shove, if I have to vote on one issue, their issue is going to be their finances because, you know, you’re not actually impacted by the social implications of these things. You don’t have a uterus. You have a ton of money.”

Big Tech cares about money and will do whatever they need to maintain revenue. Johnson pointed out that “If people are having more kids because the government is forcing them to, they’re going to have less money to spend on your products.” So again, financially, it may be smarter for Big Tech companies to support abortion.

Big Tech also has the capabilities to take a stand using data tracking. These companies are in positions where they could benefit financially by selling data that tracks abortion providers, advocates, and patients if and when Roe is overturned. They'd act as a sort of tip sheet for states that ban abortions. This may be a win for the pro-life movement. Fear of Big Tech exposing illegal abortions it may give pause  to those seeking them.

Still, a lot of Big Tech has been hush-hush about what will happen when Roe is overturned.

At the MRC however, using the Free Speech America’s CensorTrack database, studies have shown that even though Big Tech companies haven’t blatantly come out with abortion supporting statements, they have promoted anti-life content while censoring many life-affirming posts. Their opinion may be more hidden but it isn’t invisible.

Johnson moved to focus on listeners, “Is there something regular people can do to affect Twitter or Tumblr or Instagram or [are] we basically just at the whim of if and when our tech overlords decide that they care about, you know, the imposition of a new theocracy?” Both Johnson and Williams urged people to be hesitant with what they share on the internet for whenever Big Tech decides to use data for profit.

The podcast neared the end with the following self-reflecting point: “There’s somebody who is listening to this podcast and they’re like, ‘All right, look, what could I be doing right now as far as changing my social media use or consumption habits to make me less likely to be targeted by a new sort of anti-abortion regime?’”

So, if you plan to abort your baby, don’t share the news online unless you want Big Tech and therefore, the law to know about it. Karmas a bi***.