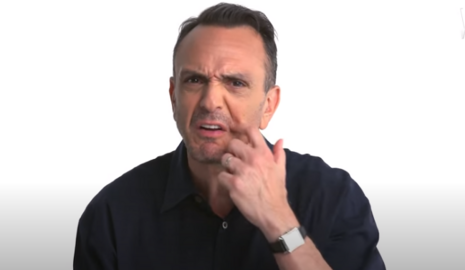 Someone needs to contact every Indian in the nation so this white actor can apologize for his “perpetuating of the [Indian] stereotype.”

Last January, white actor Hank Azaria, who was once a funny guy, stepped down from voicing the iconic Indian store owner Apu Nahasapeemapetilon on The Simpsons, which was once a funny show. Supposedly actors can only act in roles they match exactly. Azaria went on the Armchair Expert podcast yesterday with hosts Dax Shepard and Monica Padman where he offered a dramatic apology to the entire Indian population.

Azaria apologized for his “participation in racism” after voicing the role since 1990. His initial regret was instigated in 2017 when Hari Kondabolu released a documentary titled The Problem With Apu.

In the podcast conversation yesterday, Azaria said the change was a long time coming, “I’ve had a date with destiny with this thing for about 31 years,” but it “took a while” for him to realize the full gravity of his “racism.” Drama queen.

As Padman, one of the podcast hosts, is Indian-American herself, Azaria felt personally compelled to apologize to her as well. This guilt was emphasized especially after a conversation Azaria had with an Indian 17-year old at his son’s school where Azaria learned that Apu is “practically a slur at this point.”

In response to the child and to Padman, Azaria said “I know you weren't asking for that, but it's important. I apologize for my part in creating that and participating in that. Part of me feels like I need to go around to every single Indian person in this country and personally apologize. And sometimes I do when it comes up.”

Azaria added that his longtime portrayal of Apu was not intended for harm. “We tried to do a funny, thoughtful character, [But] just because there were good intentions doesn’t mean there weren’t real negative consequences that I am accountable for.” It’s a disgrace for him to kiss the feet of SJW’s over a comedy skit, but lose your sense of humor, lose your dignity.

The show and all of the cast have bowed to woke nonsense and their trend continues to progress. In June 2020, The Simpsons broadcaster, Fox, announced that the show will no longer have white actors play non-white characters. Since Azaria’s initial exit from the role, The Simpsons cast has made radical changes to their own roles too. Back in Feb 2021, white actor Harry Shearer stepped down from the role as the black character Dr. Hibbert. This is dumb. It’s a voiceover and you can’t even see the actor who’s voice is being used!

Azaria called for more ethnic representation in the whole entertainment industry. “It’s more authentic, they’ll bring their experience to it, and let’s not take jobs away from people who don’t have enough,” Azaria added when expressing the importance of giving more roles to more diverse actors. Giving jobs to people based on talent is apparently overrated.

I suppose we should redefine the definition of acting since it clearly has more to do with your skin color than your ability and talent. Otherwise we are going to have more ridiculous apologies like that of Azaria.