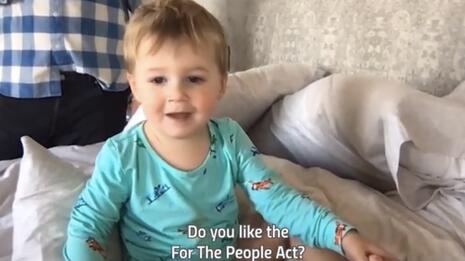 If you’re the kind of person who cares what a C-list celeb’s kids look like, does Amy Schumer have a deal for you! Just sit through a political lecture from her.

On Thursday April 1, actress and comedian (?) Amy Schumer gave a chipper PSA for representUS. The intent was to express Schumer’s support of the H.R. 1: For the People Act or whatever the heck they’re calling it. The whole skit, and Schumer in general, is pretty vile (It’s no wonder she starred in the movie Trainwreck.)

Amy started out as such: “Hello, I need your help … At the end of the video, I'm gonna show you my son, my little baby. So that is bribery.” Who could resist that enticement?

To Schumer, H.R. 1-- a bill designed to keep Democrats perpetually in power -- is so “that politicians can't steal our goddamn elections."

The unconstitutional legislation would invalidate state laws requiring voter ID, make absentee ballots more insecure than they already are (election 2020 anyone?), make voting registration a requirement, and even open doors for hackers and cybercriminals to digitally modify votes. It’s a ballot harvest. If you have the ability to read, you can see that this is a bad idea.

So Schumer lied about it:

The short version is that the For the People Act is awesome, unless you hate democracy. And I know that you don't, you love democracy

This bill will save our elections. It is also how we finally stick it to political corruption so that billionaires will be stopped from buying elections and so that Congress pays attention to the issues that matter in this country.

This permanent change to voting rules would be a clear Democratic advantage and is not in fact “For the People.” It’s for the Dems. Brainwashed Tinseltown is helping them sell it.

This isn’t the first time Schumer showed her face where nobody wanted it. Back in October, she and other celeb-wanna-be-politicians put on an “I Will Vote” concert for Joe Biden and Kamala Harris. Not to mention her cousin, Charles Schumer, is Senate Majority Leader. Crazy runs in the family.

As Hans A. von Spakovsky of yhe Heritage Foundation wrote in a FoxNews.com oped, “Senators who supports H.R. 1 should realize that they are essentially in favor of throwing the validity and credibility of future elections in doubt and taking away the authority of the voters of their states to make their own decisions on how their elections should be run.” Can someone send this piece to Schumer and her two-year-old for further review?

Schumer finished the video saying, “I support it, baby Gene supports it, and we both need you to support it too. Are you really going to disappoint a baby?”