Michael Moore to MAGA Fans: ‘A Lot of You Are Going to Die’ From COVID 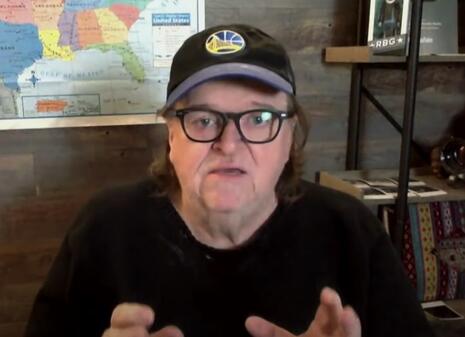 Woke leftists will always make stupid statements. (Recall how David Letterman claimed the press “educates” and “informs” people.) It’s a fact of life. One can only hope that they're too dumb to understand what they are actually saying, or merely indulging in sarcasm.

Hopefully that’s the case for documentary filmmaker and Trump-hater Michael Moore, who wrote a lengthy post on his Facebook account addressed to "MAGA Nation." In a tone that was dripping with condescension disguised as magnanimity, Moore made a plea to Trump supporters: “Don’t Die. Your love of and loyalty to Trump isn’t worth your life. With 73 million of you refusing to wear a mask and to social distance, there’ll be no way to eradicate this disease. And a lot of you are going to die in the next three months. Why do you want to infect your spouse, your parents and grandparents, your children?”

It is astounding that Moore assumes that every single one of Trump's 73 million voters this year take zero steps to prevent the spread of COVID and that the virus only affects the red parts of the country. Maybe he should be lecturing the other side of the aisle with advice to wear a mask and social distance because leading Democrats don’t. Anyway, most COVID catchers will not die of it, as Alyssa Milano - and, well, science - can testify.

Moore continued: “If al-Qaeda started killing one American every 37 seconds, what would you want to do about that? Why are you doing NOTHING to stop this slaughter?”

He then made an emotional appeal for MAGA fans to think of their families: “What will it take for you and I to join, arm in arm, to kill Covid-19? The death of your mother? Your son? Where’s the exact line where you’ll say enough is enough?”

A touching plea, one that would thaw the coldest of hearts. Seriously, Moore. Since when did shaming and baseless accusations ever change anybody’s mind?

Moore then generously proclaimed, “So today I am reaching my hand out to you, my neighbor, my fellow American. I do so out of love and respect and the deep desire to see you live. Let’s agree to wear a mask. Let’s agree to keep our physical distance.”

Out of love and respect? He had just accused Trump voters of aiding the spread of the virus, wanting to infect their families, and acting like heartless beasts for “doing nothing to stop this slaughter.”

To show that he’s loving the sinner but not the sin, Moore added, “And to be clear, for some of you, I truly don’t love the racism and misogyny and most of your political beliefs.”

He’s in luck then, most MAGA fans are not racists. Misogyny? It would seem that he’s never heard of Republican women like South Dakota Governor Kristi Noem. Moore needs to get his facts straight and stop his hypocritical behavior. After all, his side can be remarkably sexist for all their talk about equality.

Moore prattled on with thinly veiled threats: “Look at it this way — if millions of you die off, that’s a lot less Republican voters — and that means we win every election from here on out! Do you want your loved ones who are left behind to be ruled by US?”

It would take a while for millions of MAGA fans to die off, given that the COVID death toll this year so far is 270,000 (with a significant portion of that coming from blue states if we're going to be as politically crass about death as Moore) and the death rate is dropping. Looks like Moore will be stuck with tens of millions of MAGA fans for sometime.

Moore ended his disgusting post with, “And most important, when you’re dead from Covid-19, who’s gonna be left to kick my ass?! No one! And you KNOW, that just ain’t right.”

Nice try, Moore, but it doesn’t take a fool to see through your magnanimity.