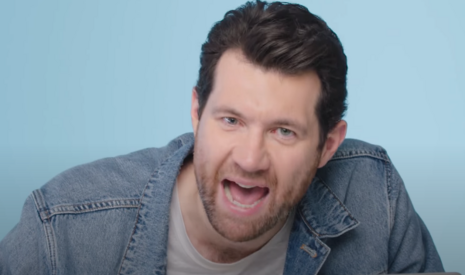 Everybody loves a bully. Nothing is more attractive than wanting to make life miserable for a mother with seven children. But as long as she’s a threat to reproductive rights and the sacred Affordable Care Act, anything goes.

Billy Eichner, comedian, actor, and old talk show host of Billy On the Street, tweeted yesterday: “One thing I know is that the LGBTQ community loves to unite together against a common enemy - and if Amy Coney Barrett comes for our rights - the ones we already have and the ones we’re entitled to - we will be sure to make her life a living hell.” 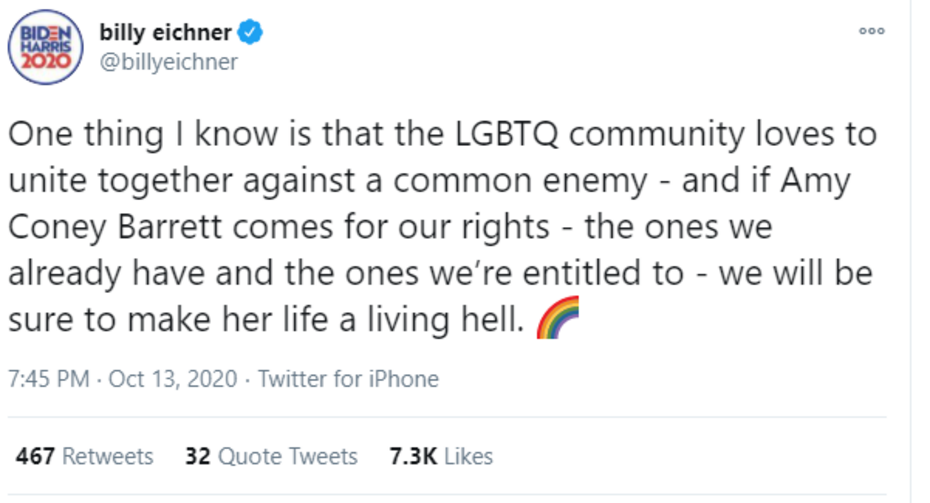 A typical tweet from the ever tolerant, open-minded Left.

Rights they’re “entitled to?” Are they serious? LGBTQ people are so focused on rights. But they already have the same rights of heterosexuals. Homosexuals have the rights guaranteed in the Constitution. Homosexuality has been decriminalized. They can marry. They can adopt children. They can have their own families. They even have a huge representation on TV. What else could they possibly be “entitled to?” They probably want a rainbow flag to be planted on the moon for “universal equality.”

Apparently, peace does not reign over the LGBTQ community. Otherwise, they wouldn’t need to “unite together against a common enemy.” And this community is only uniting to make somebody’s life “a living hell.”

It would seem that Eichner has decided to make Amy Coney Barrett his personal enemy, as yesterday’s tweets on his Twitter account indicated. He posted three in total. For tweet number two, he said yesterday that “Replacing RBG with Amy Coney Barrett is like replacing Meryl Streep with Candace Cameron.”

Is that so? For the past two days, Barrett has followed the Ginsburg Rule pretty well during the hearings to fill in the open seat on the Supreme Court. And anyway, being compared to Cameron isn’t really insulting, even if it was meant to be.

Tweet number three claimed that “Amy Coney Barrett is an unqualified, inexperienced religious extremist.” The post included a video of Senator Amy Klobuchar reading aloud the laws that prohibited voter intimidation at the polls after Barrett declined to give her stance on the issue.

But isn’t that the same tactic that Ginsburg, the patron saint of the Left, used during her nominee hearings?

Obviously, the youngest candidate to be nominated to the Supreme Court, who followed the tactics of Leftist heroine RBG, and who didn’t even need notes to get through the Supreme Court nominee hearings, was undoubtedly “unqualified” and “inexperienced.” And she’s a “religious extremist?” Has Barrett beheaded journalists or flew airplanes into buildings?

Eichner’s behavior is similar to that of a bully, and his statements are clearly illogical. In that way, he resembles many other Leftists.