Lib Celebs Mix Sympathy for Hillary with Digs at GOP

Hillary Clinton was no stranger to controversy this weekend. After labeling half of Trump supporters “deplorables” and becoming unsteady at a 9/11 commemoration ceremony, the Democratic candidate was diagnosed with pneumonia, leading her to cancel a California fundraising trip and a scheduled appearance on The Ellen Show.

Yet, although they missed seeing her person, Hill’s Hollywood fans took to Twitter to express concern for her health, while others threw in some snide comments about the Right for good measure. 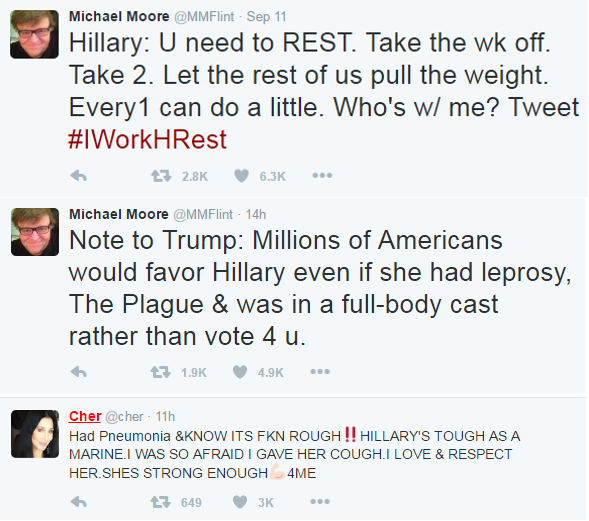 Ultra liberal filmmaker Michael Moore called on his followers to shoulder some of Clinton’s workload while she recovered. “Hillary: U need to REST. Take the wk off. Take 2. Let the rest of us pull the weight. Every1 can do a little. Who’s w/ me? Tweet #IWorkHRest.” Moore’s tweet garnered over 6,300 likes.

Later, he turned sour, posting: "Note to Trump: Millions of Americans would favor Hillary even if she had leprosy, The Plague & was in a full-body cast rather than vote 4 u."

Cher was all sympathy, writing: “Had Pneumonia &KNOW ITS FKN ROUGH!! HILLARY'S TOUGH AS A MARINE.I WAS SO AFRAID I GAVE HER COUGH.I LOVE & RESPECT HER.SHES STRONG ENOUGH 4ME.” 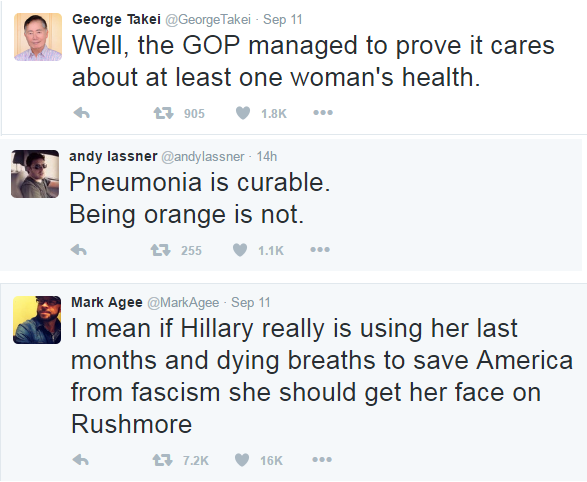 Actor George Takei resorted to sarcasm. “Well, the GOP managed to prove it cares about at least one woman’s health,” he commented.

The Ellen Show producer Andy Lassner directly attacked Trump with his tweet: “Pneumonia is curable. Being orange is not.”

Comedy Central writer and stand up comedian Mark Agee added: “I mean if Hillary really is using her last months and dying breaths to save America from fascism she should get her face on Rushmore.”

It’s too bad sympathy for an ill woman must go hand in hand with digs at conservatives.