Well, folks, liberal producer Chuck Lorre is at it again with the ridiculous vanity cards.

Young Sheldon and Mom, which both aired Thursday night, ended with a particularly interesting vanity card bemoaning how Lorre's "naive belief" in "the common sense of America" is gone and now he sees "the inherent madness" not just in Americans, but all human beings. No doubt this related to President Trump, whom Lorre has called out previously. His card also paraphrased Yuval Noah Harari, an Israeli philosopher whose views on humanity and freewill are extremely nihilistic.

The vanity card in question said the following (transcript provided below): 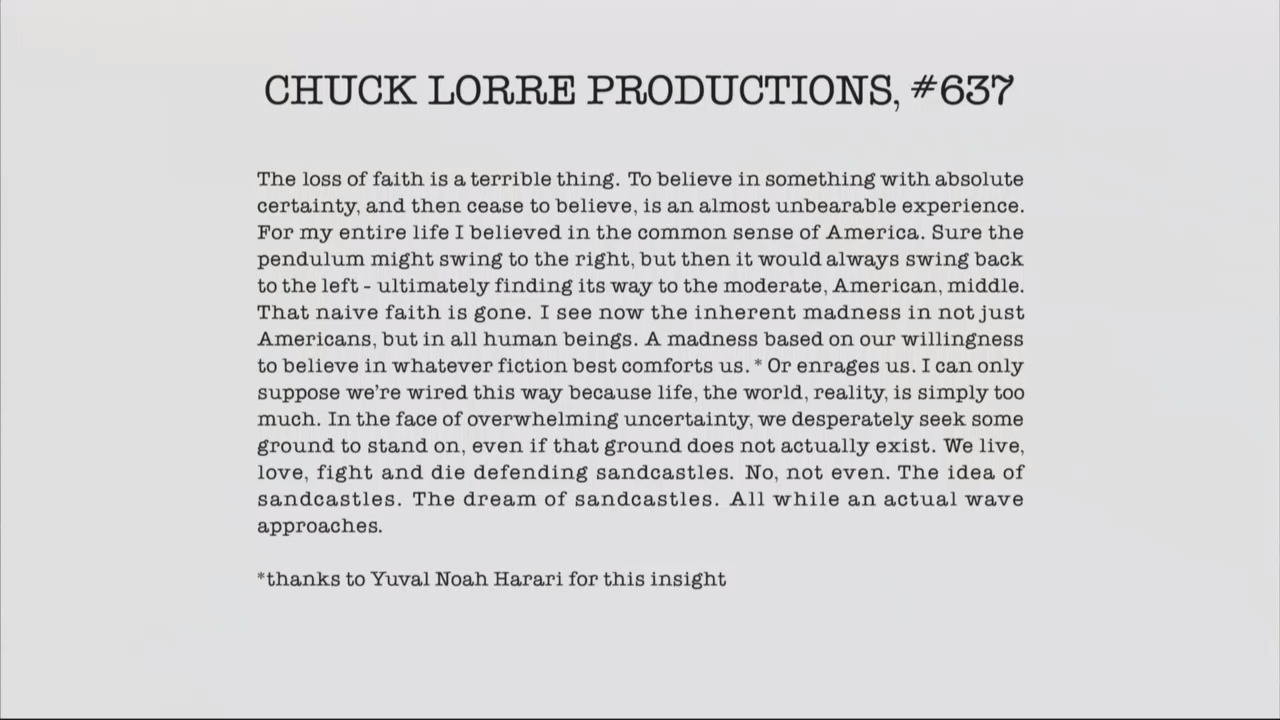 The loss of faith is a terrible thing. To believe in something with absolute certainty, and then cease to believe, is an almost unbearable experience. For my entire life I believed in the common sense of America. Sure the pendulum might swing to the right, but then it would always swing back to the left - ultimately finding its way to the moderate, American, middle. That naive faith is gone. I see now the inherent madness in not just Americans, but in all human beings. A madness based on our willingness to believe in whatever fiction best comforts us.* Or enrages us. I can only suppose we're wired this way because life, the world, reality, is simply too much. In the face of overwhelming uncertainty, we desperately seek some ground to stand on, even if that ground does not actually exist. We live, love, fight and die defending sandcastles. No, not even. The idea of sandcastles. The dream of sandcastles. All while an actual wave approaches.

*thanks to Yuval Noah Harari for this insight

He called out humanity, and America specifically, for its inability to find a moderate, middle ground, but the truth is that America is capable of achieving the middle ground — just not with the nihilistic mindset sported by Mr. Harari, and, apparently, by Mr. Lorre.