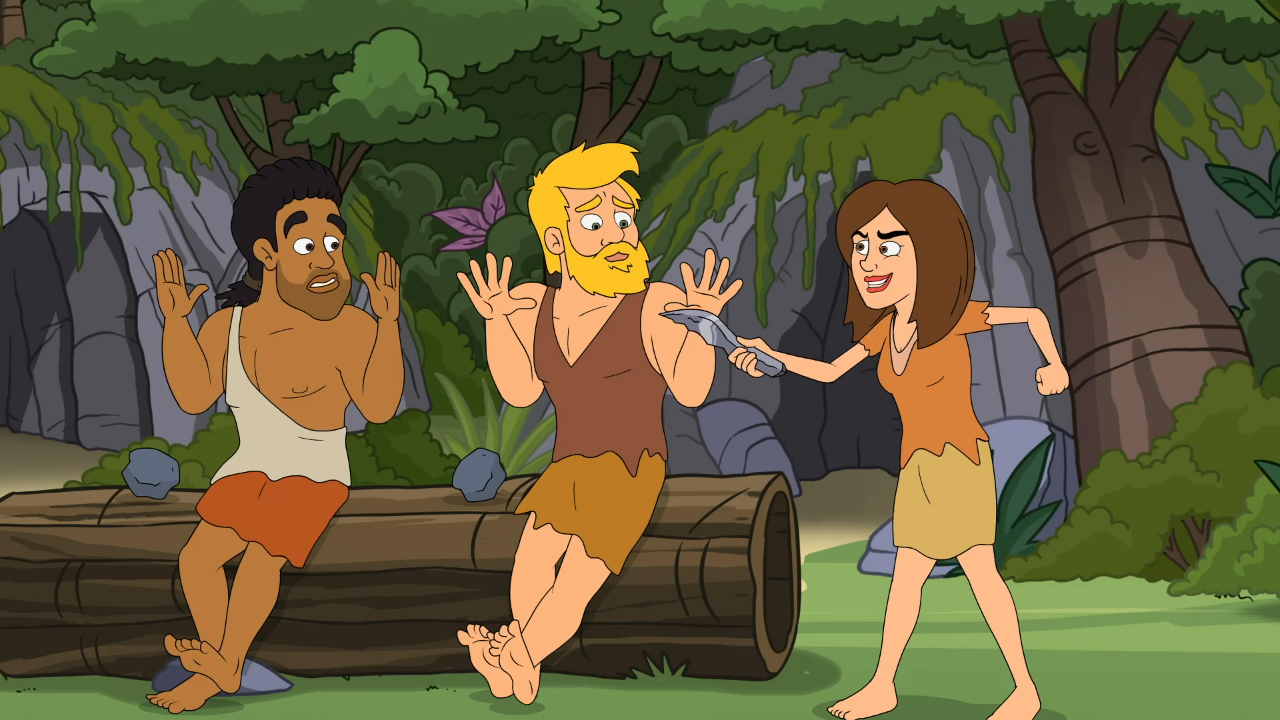 Facebook Watch’s animated show Human Discoveries, starring the voices of Zac Efron and Anna Kendrick, is essentially a social commentary about today set in the Stone Ages discussing gender inequality, gender roles, and, the topic of the most recent episode, gun control. In Tuesday's fourth episode, "And Then They Defined the Relationship," the camp is divided on whether everyone having "hand spears" makes the camp safer or more dangerous.

This allegory for gun control starts when Marsh (Ed Begley Jr.) accidentally gets knocked off a cliff because of a distracted elk chasing a butterfly. After Jane (Anna Kendrick) discovers CPR and saves his life, Marsh tells the story to the group that the elk attacked him, leaving out the fact that it was completely an accident.

When asked why he didn’t just kill the elk, Marsh responded that he didn’t have a spear, because only hunters like Ugg (Paul Scheer) are allowed to have one. Minerva (Jillian Bell) insists that if Marsh had a spear he wouldn’t have almost died. Jane on the other hand, is against the idea because it is “stupid and dangerous to give them to anyone.”

Minerva: Sorry, why didn't you just kill the elk?

Marsh: I told you, we had a vicious back and forth. I just couldn't finish it off because I ... didn't have a spear.

Minerva: Uh, why not?

Ugg: Because only hunters have spears.

Minerva: Does anyone else doesn’t think that’s fair?

Minerva: Oh, is it safer? Huh, that’s funny, it sounds like, I don’t know, Marsh would have been safer if he had a spear. Come on, Jane, back me up here.

Jane: You know, after single-handedly saving Marsh this morning I realized that life is precious and I don’t want these instruments of death anywhere near me. Frankly I think it’s stupid and dangerous to give them to anyone.

Ugg: Whoa! A spear isn’t just a weapon, it’s a responsibility you know giving them out all willy nilly would be ridiculous.

Minerva, after not being able to use a spear because it is too heavy, accidentally invents a hand spear, a concealable weapon that everyone gets, to the dismay of Ugg who insists that it is too dangerous for everyone to have one.

Minerva states that “this is about principle. Everyone should be allowed to defend themselves,” calling it a "fundamental human right." But once everyone in the camp gets hand spears things start to go out of control. Marsh and Beth (Stephanie Beatriz) get into a fight with the spears because of a comment said earlier. Ugg explains that if everyone has a weapon everyone looks like a threat.

Jane, the typical liberal who is totally against the idea, gets her hands on a spear and goes a little crazy. Jane stabs Gary when he's dressed in a bear costume while trying out roleplaying but neglecting to tell the camp what he was doing.

Minerva finally drops her fundamental human right argument and agrees that the camp is safer if only the hunters have weapons. Everyone then throws their weapons off a cliff and decides that not having spears is the best way to go for the safety of everyone. Forgetting the fact that throughout the series many characters have died because of the crazed elks who are trying to get rid of the humans and a bear who was running rampant throughout the camp.

The show illustrates liberal illogic, ignoring that the world is dangerous but instead showing what they think will happen when everyone has access to a weapon.