Back in school, math was my least favorite and most troublesome subject. But it seems like I ought to take another look: I’ve just learned that math is “white” and “cisheteropatriarchal,” just like me! 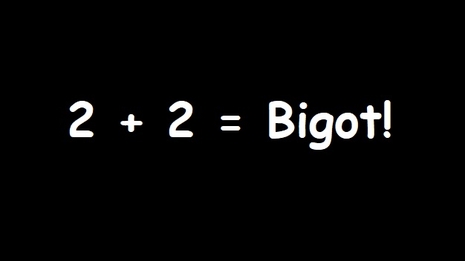 That’s the conclusion of Vanderbilt U. education professor Luis Antonio Leyva (he/him/él). According to the invaluable College Fix, Leyva delivered a lecture at a big-time mathematics meeting in Boston in January. The lecture, according a tweet from Leyva, “was based on my research interrogating undergraduate math education as a white, cisheteropatriarchal space.”

According to the lecture’s abstract, his “findings depict[ed] how Black, Latin*, and Asian QT [queer and transgender] students’ narratives of experience reflect forms of intersectionality, or instances of oppression and resistance.”

Grateful to be distinguished with the opportunity to deliver the Spectra (@LGBTMath) Lavender Lecture at the 2023 @JointMath Mtgs in Boston tomorrow. I will deliver a lecture based on my research interrogating undergraduate math education as a white, cisheteropatriarchal space. https://t.co/JiaTe0B8zs

At this point you, dear reader, are saying, “So basically, Professor Pronoun made some s*** up and used the most obfuscating language he could think of to get other frauds to nod sagely in sham understanding?”

No! Leyva did real research. He followed the “educational experiences of 39 undergraduate queer and trans* (QT) students of color pursuing STEM majors across historically white and minority-serving universities in the United States.”

And as an education professor, Leva “draws on critical race theory, women of color feminisms, and queer of color critique to conceptually and methodologically ground his scholarship, which centers historically marginalized voices in STEM higher education across intersections of race, gender, and sexuality.”

Why are you laughing? This is a serious man doing serious research into serious things. Seriously. Just check out the abstract: he doesn’t just diagnose the problem in college math, he proposes solutions:

I conclude by re-imagining undergraduate mathematics education with structural disruptions that advance justice for learners marginalized across intersections of race, gender, and sexuality.

And what’s the point of university-level math instruction if not to advance justice for learners marginalized across intersections of race, gender, and sexuality?